TIFF Kids International Film Festival will be happening from April 7 to 19th. Now in its 18th year, the TIFF Kids International Film Festival has become one of the most important film festivals in the world with special programming and activities for children aged 3 through 13. I got to preview some fabulous short films and features. We totally enjoyed the La gang des hors-la-loi (The Outlaw League) and recommend everyone to watch this funny movie. The 2015 TIFF Kids Festival features a total of 126 films, comprising 25 features and 101 shorts hailing from 36 countries, including Australia, Germany, the Netherlands, Japan, France, India, Russia, and many more. 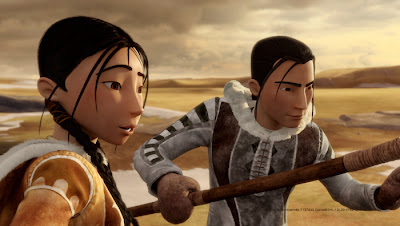 The Legend of Sarila (La légende de Sarila) by Nancy Florence Savard is an 82 minutes Canadian film inspired by various Inuit legends that explore the themes of friendship, hope, perseverance and self acceptance. This animated 3D movie is wonderful to watch for anyone over 8 years. The movie shows that life can be harsh and challenging for people who live on the Arctic tundra and how important the animals in the tundra are for their survival.

Email ThisBlogThis!Share to TwitterShare to FacebookShare to Pinterest
Labels: canada, entertainment, film, friendship, fun, inuit, movie, review, TIFF, toronto, toronto film festival
Older Posts Home
Subscribe to: Posts (Atom)
You will find reviews of products we like, and giveaways for you to win.
You can follow us at