Go Back in Time with these DK Canada Books 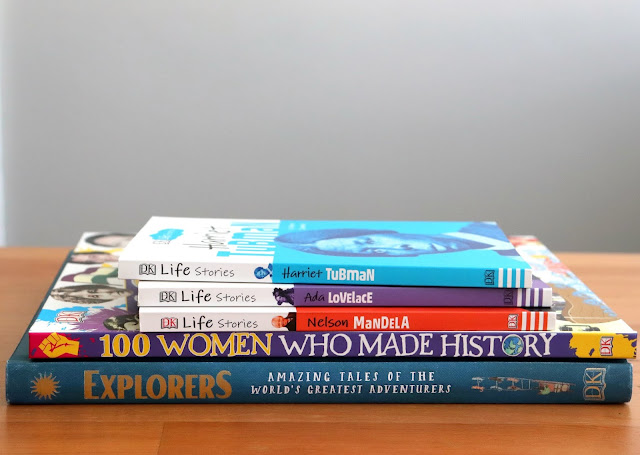 We have been learning a lot of facts about influential people from the past that still impact our lives from a variety of DK books: The 100 women who made history, Explorers, and books from the DK Life Stories series. These books deliver the facts in a fun manner using colourful images to keep the readers engaged. 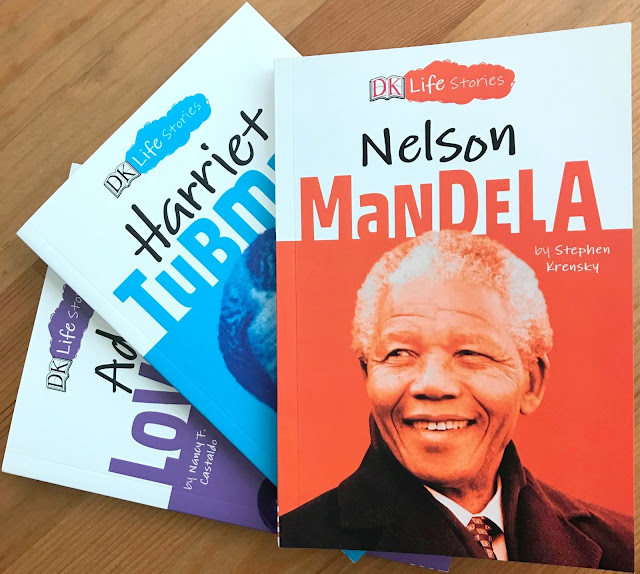 The three books we read from the DK Life Stories series are about Ada Lovelace, Harriet Tubman, and Nelson Mandela. We love how these books are written chronologically with all the details, so we can read it like a story and learn what these inspiring people have done for the society.

Harriet Tubman, a fearless activist and abolitionist who helped free many slaves escape to freedom in the North using the "Underground Railroad" was born into slavery in 1820. She later ran away and become a nurse, scout, and advisor during the American Civil War. Harriet co-led the Combahee River Raid, in which 700 slaves were liberated. After the war, Harriet became involved in women's suffrage, or the right to vote, and opened a retirement home for sick and elderly African Americans. In this biography book, we can learn all about Harriet Tubman's fascinating life, the hardships she endured, her visions, the people she helped and rescued, the battles she fought, and how this American icon of justice and strength continues to inspire so many people today.

The book about Ada Lovelace tells us about the first person who wrote the world's first computer program. In this book, we learn all about Ada Lovelace's life, her family including her famous father (celebrated poet Lord Byron), her talent for languages and mathematics, and her predictions for how computers could change our lives. In 1833, Ada Lovelace met mathematician Charles Babbage, inventor of calculating machines. She went on to devise a way of inputting data into Babbage's Analytical Machine, and in doing so became the first ever computer programmer. 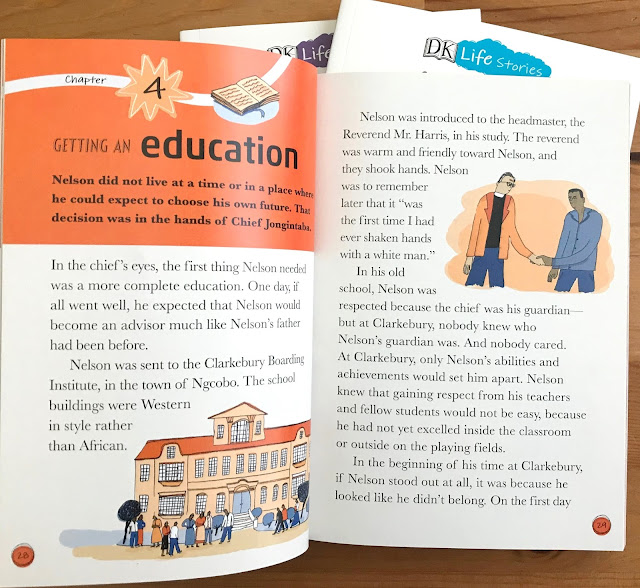 It was inspiring to read the story of Nelson Mandela, who became the first black president of South Africa after spending 27 years in prison. In 1964, Nelson Mandela was sentenced to a lifetime in jail for attempting to overthrow a government that openly discriminated against its black citizens. After spending 27 years behind bars, Mandela was released, allowing him to continue his struggle for equality in South Africa and to become the country's first black president.

We like these biography series designed  specifically for children age 8 to 11. We have checked other books in this series, as it goes beyond the basic facts to tell the true life stories of history's most interesting people. The full-colour photographs and hand-drawn illustrations complement the age-appropriate text, which engages readers of all ages. There are definition boxes, information sidebars, maps, inspiring quotes, reference section, and other nonfiction text to add depth. Each book also includes an author's introduction letter, a glossary, and an index. We really enjoy learning from these children's biography books. 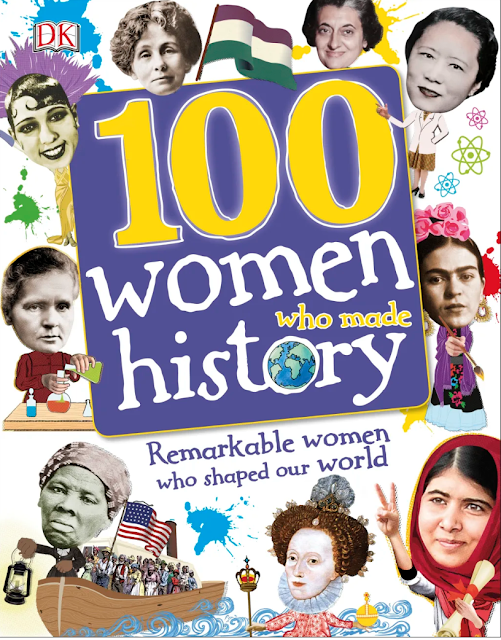 100 Women Who Made History, celebrates centuries of women and girls that have shaped our world. This visual guide takes the readers on a tour of the past and the present. From super scientists like Marie Curie to clued-up creatives like Emily Dickinson to leading ladies like Eleanor Roosevelt. The book explores the lives of each woman in detail with photography illustrations that present history in a fun way. 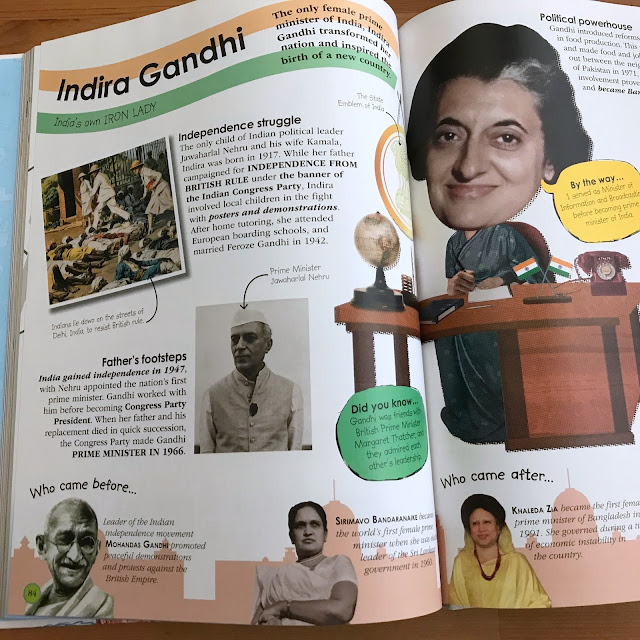 We like how the stories can be put into context as there are panels to show the things that influenced and were influenced by each woman. Special features highlight contemporaneous women and women in similar fields to paint a more complete picture for young readers. This is a useful learning tool that approaches human rights and gender equality from an age-appropriate angle. 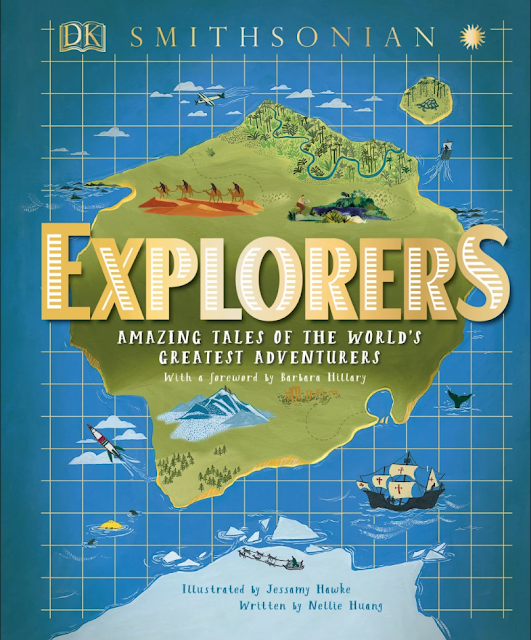 We can meet famous explorers and adventurers in this exciting non-fiction storybook for children. This Explorers book shows that great explorers have one thing in common: a desire to leap into the unknown, no matter how dangerous that might be. Explorers documents the trials and hardships of the men and women who rewrote our understanding of the world, and showed us what humans are capable of. 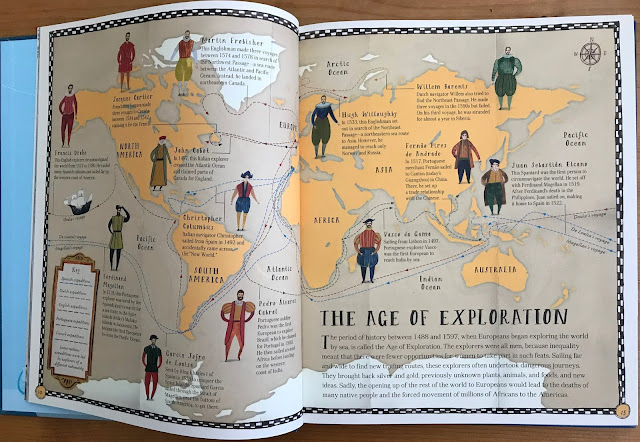 There is an inspirational foreword by Barbara Hillary, the first African American woman to reach both the North and South poles while in her seventies. 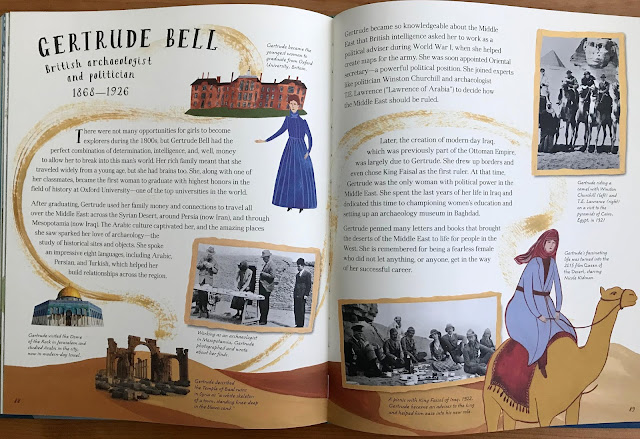 There are details of more than 50 explorers with cross-sections revealing the detail inside Spanish galleons, lost cities, and spaceships. Hand-drawn maps reveal their intrepid journeys in great detail, and photographs highlight the artefacts and relics they found along the way. The explorers come from all walks of life and parts of the world. Explorers is packed with jaw-dropping facts will be enjoyed by young adventurers. 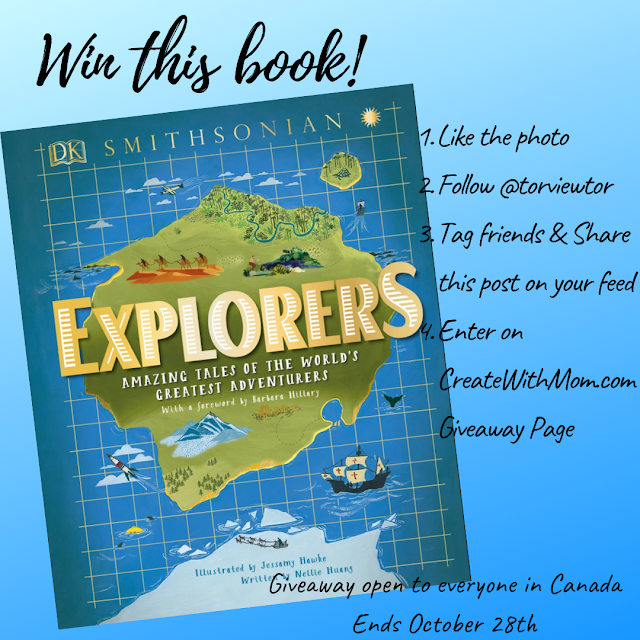 Giveaway:
If you are in Canada and would like to win a copy of Explorers enter the giveaway before October 28th. Please leave comments and follow my social media networks to be eligible to win.
Update: The winner is Linda

Entry-Form
Disclosure: This post is in partnership with DK Canada. Please note that all opinions and thoughts expressed are my own. All rights reserved on photographs and written content Createwithmom © 2010 - 2019. Please Ask First