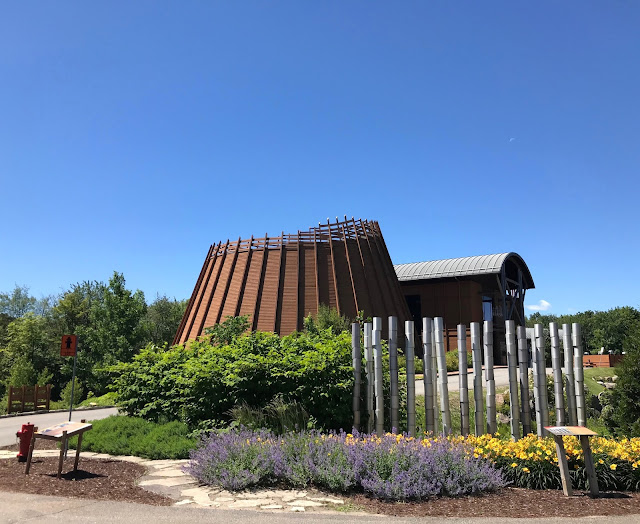 After our visit to the Huron Traditional Site, we checked into Hôtel-Musée Premières Nations in Wendake, Québec. This beautiful boutique hotel built in 2008 is inspired by First Nations' culture and the relations they share with the rest of the world: nature, spirituality, and mythology. 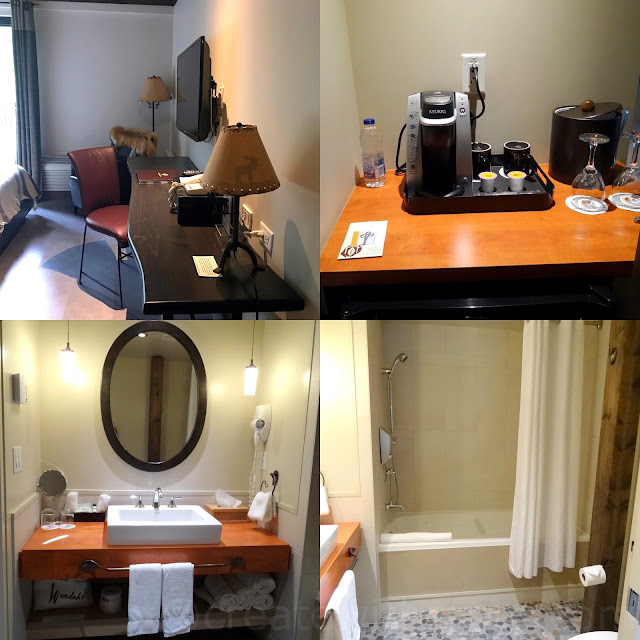 It has modern amenities inspired by native art and culture. The décor speaks the timeless traditions of Wendake. The room has all the basics including a coffee machine and mini fridge. We liked the unique elements in the room such as the beaver pelts cushions on the bed, the woollen blanket, decorative lamp shades, wooden side tables, and the stone floors in the washrooms. 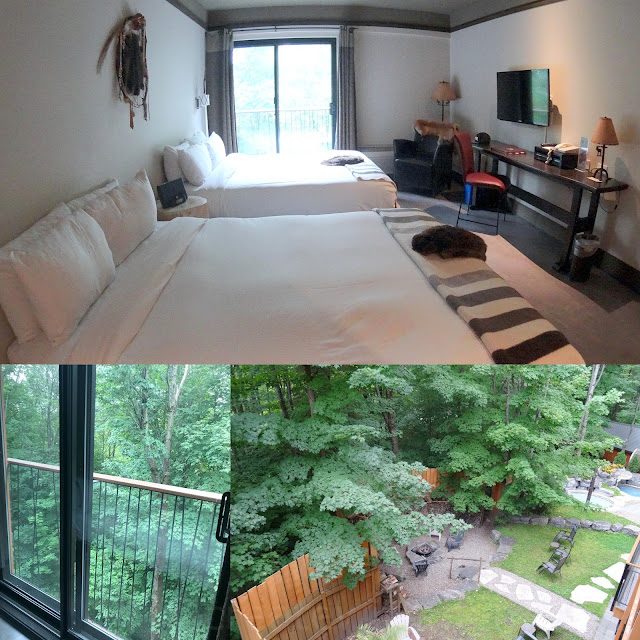 The view from the room is beautiful. The Akiawenrahk river can be seen from all 55 rooms and suites. 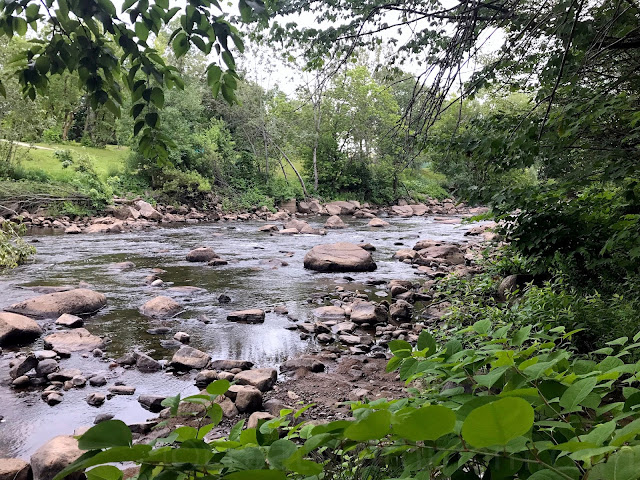 We enjoyed the calm, peaceful, and beautiful setting as we walked around the property. 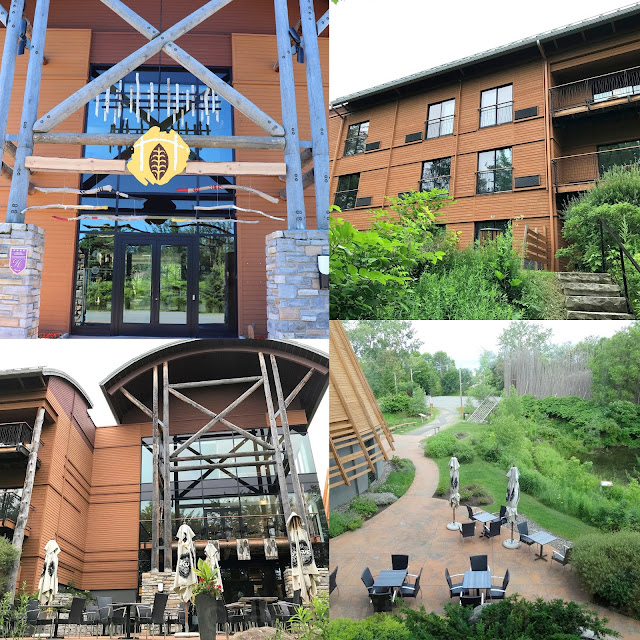 The hotel has a multi-sensorial spa, gym, ballroom that can accommodate 150 guests, 2 executive meeting rooms, cocktail area, 6 private meeting rooms, and other facilities making it a lovely setting for weddings, conventions, and special events. There is high speed wireless Internet and free parking. 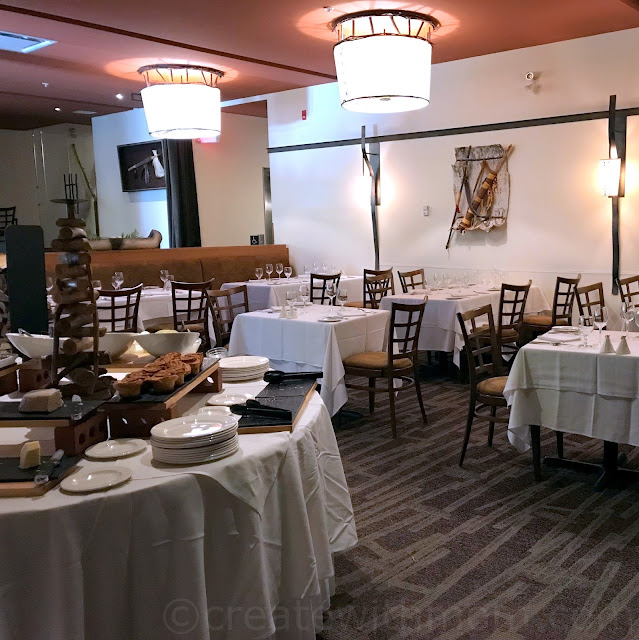 There were a lot of choices at the buffet breakfast at La Traite restaurant, which was a fabulous start to our day. 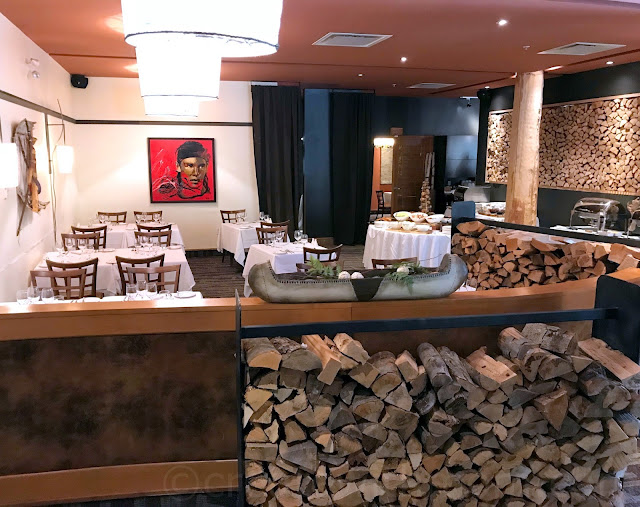 The hotel's reception area is an inviting space with beautiful décor and native design elements. 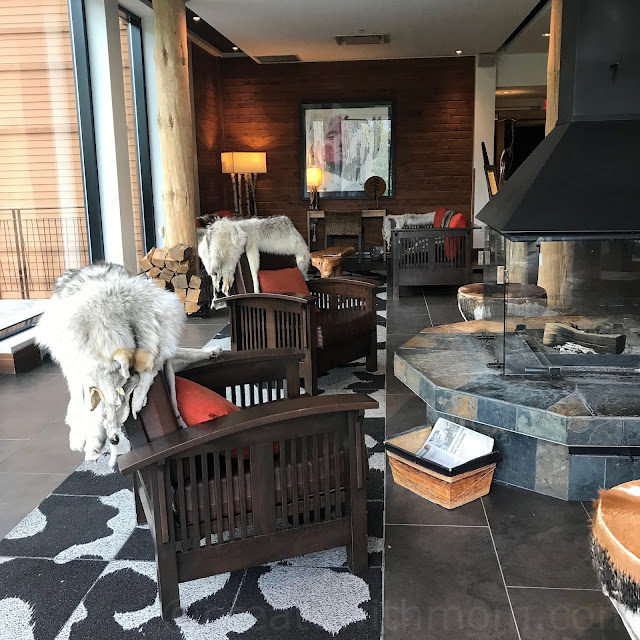 The Huron-Wendat museum is beside the main lobby of the hotel by the entrance. This museum is created to conserve and promote the heritage of the Huron Wendat Nation, and teaches us more about the Wendat people and their heritage. 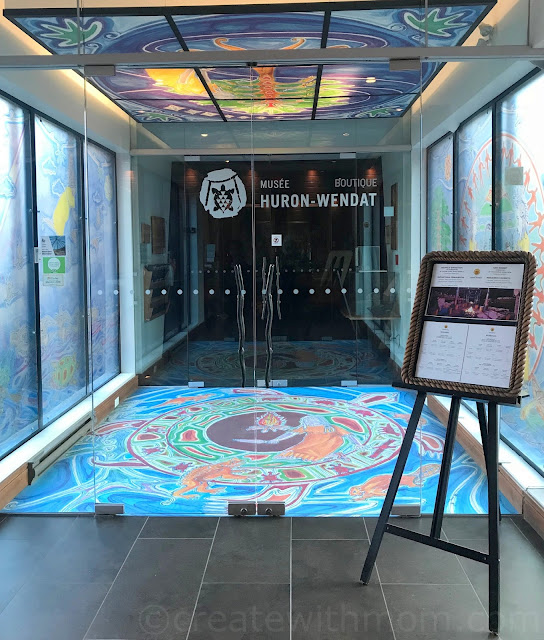 The hotel offers a variety of packages for us to explore the culture. We participated in the Myths and legends activity held in the evening at the National Longhouse of Wendake. The Longhouse Ekionkiestha is a traditional dwelling of the Huron-Wendat people during the pre-contact period. The longhouse symbolizes family and hospitality. 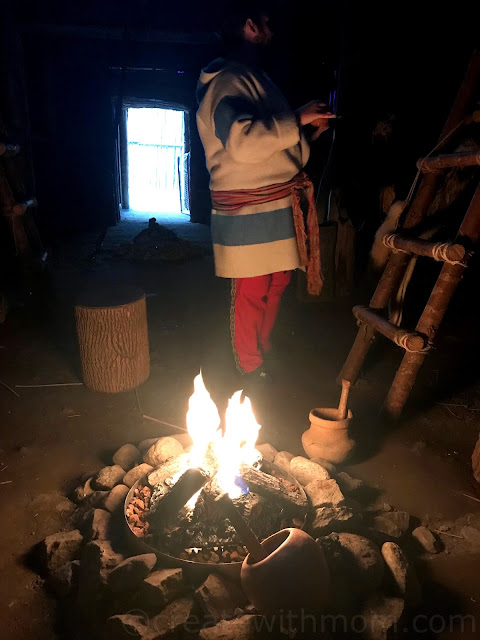 We enjoyed listening to the storyteller's songs and the legend of how the Wendat and First Nations people believe the world was created, while drinking the Labrador peppermint tea during the one-and-a-half hour activity by the fire. Getting an enthusiastic storyteller makes all the difference to enjoy this experience.

Instead of sitting on the logs to listen to the storyteller, it would have been nicer if we had the option to sit on the sleeping areas of the longhouse. It would have also been more fun and engaging if the storyteller included  other myths and stories passed on by the elders of the community. 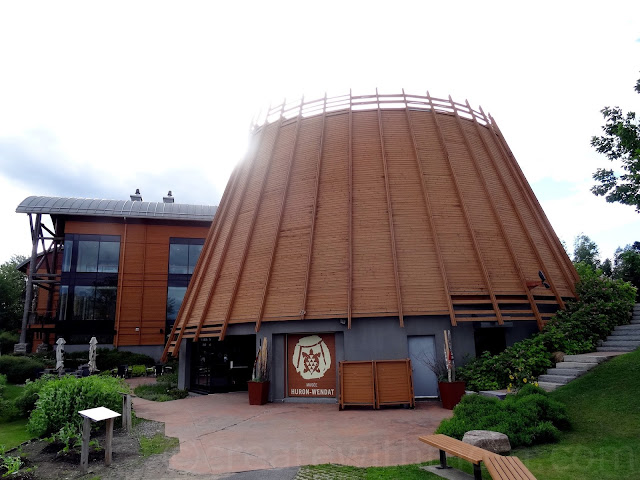 There are a variety of tour and experience packages such as spending a night in the National Ekionkiestha' longhouse and jewelry making offered at Hôtel-Musée Premières Nations. We were able to experience the Discovery package, which includes a tour of Musée Huron Wendat with a guide so we can understand the artifacts at the museum. 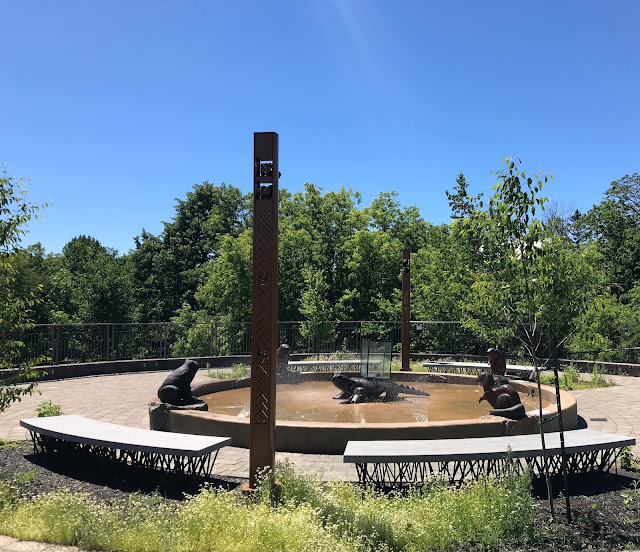 Before going to see the Kabir Kouba falls we saw the animal sculpture made by Wendat artist Christine Sioui-Wawanoloath which made sense to us after we heard the creation story during the Myths and legends experience. 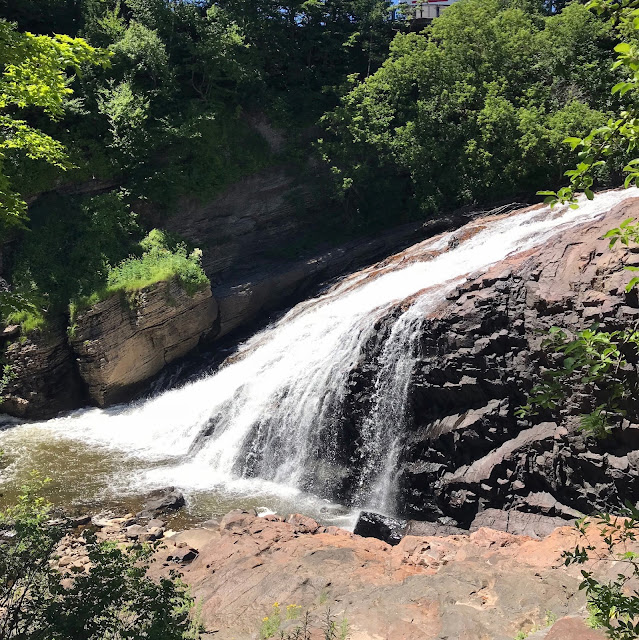 Kabir Kouba falls measures 28 meters, and plunges into a 42 meters deep canyon. Archeological digs have revealed the flour, saw, and paper mills that were built in the 18th and 19th centuries. 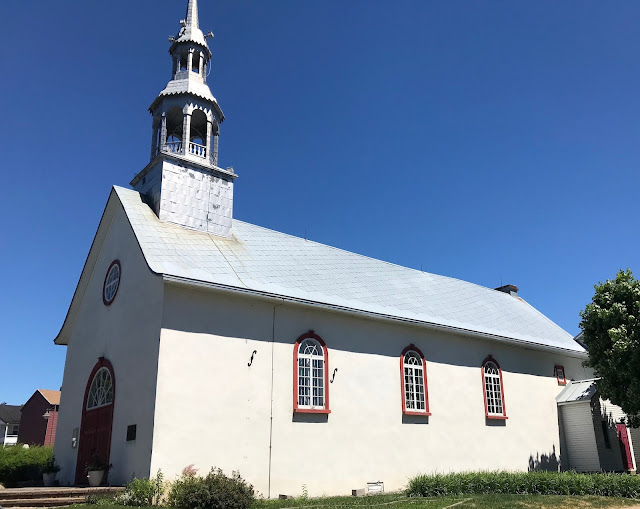 Notre Dame de Lorette church was built in 1730 inspired by the Italian church Santa Casa de Loreto. There were treasures such as wood sculptures and jewelry that belonged to the Jesuits missionaries. These belongings were handed to the Huron-Wendat people in 1793. 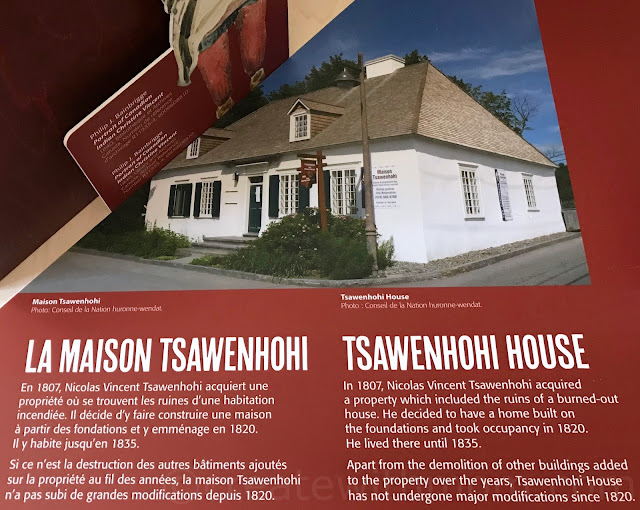 Tsawenhohi house was first occupied by Grand Chief Nicolas Vincent Tsawenhohi who was declared as a national historic figure in 2001. He was the first Huron-Wendat chief to address the Lower Canadian House of Assembly in 1819. This house served as a meeting place for the Huron-Wendat and other important dignitaries and personalities. 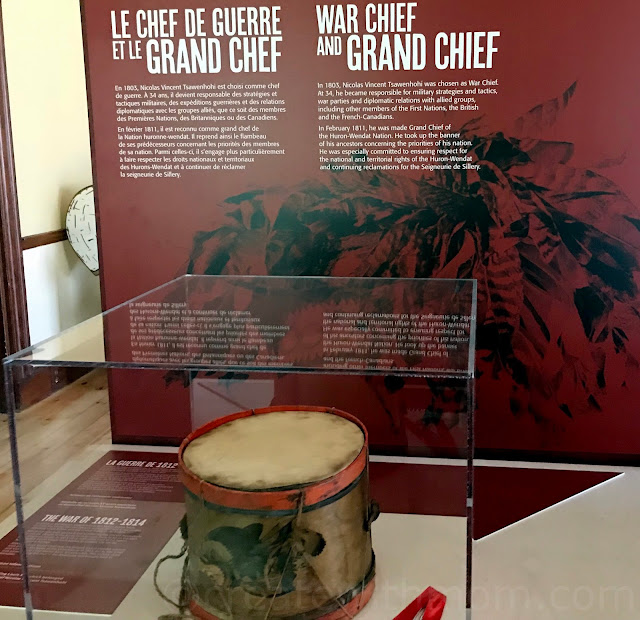 Visiting Wendake will give a unique and memorable experience. It is a perfect opportunity for families and individuals to learn about the First Nations people.

In our opinion, every single person in Canada should learn about First Nations and respect their 3000 year old culture – especially after all the different injustice and discrimination that has happened and is happening to their people since the European settlers came to Canada.

During our different experiences in Manitoulin Island, Miramichi, and Wendake, we learned how much injustice has happened in history during trade for beaver pelts and fur, taking over lands, destroying First Nations culture and language through residential schools, and to date not giving the due respect to include all of this history in our curriculums. I am glad that there are museums and sites we can visit to have these experiences and gain knowledge.

As a nation we need to teach ourselves and future generations of the past, and do what we can to respect and ensure more justice is done by the governments to preserve the culture, language, and the livelihood of First Nations people. 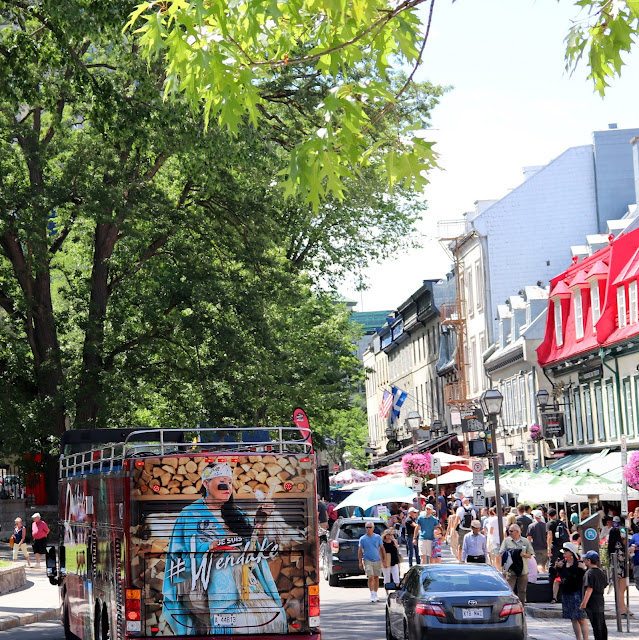 When visiting Québec City tourism information centre at 12 Rue Sainte-Anne, you can easily take a day tour in the green line shuttle to the Hôtel-Musée First Nations or for a thorough experience spend a couple of days at these locations in Wendake.

Disclosure: Please note that all opinions and thoughts expressed are my own. This post is in partnership with Aboriginal and Quebec City Tourism. All rights reserved on photographs and written content Createwithmom © 2010 - 2018. Please Ask First