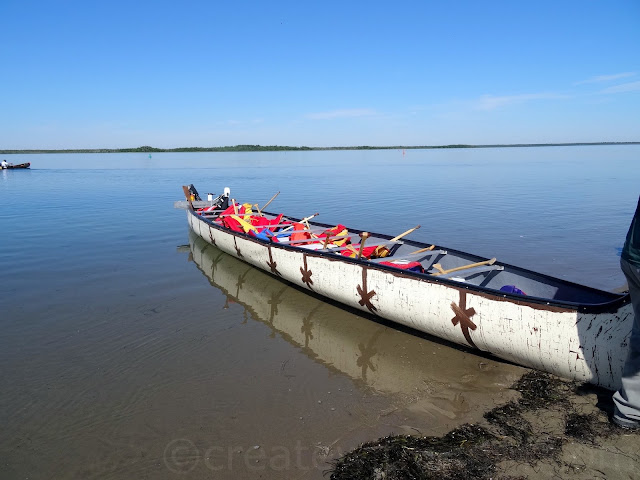 In our road trip from Ontario through Outaouais and Drummondville to Edmundston, we went to Red Bank, New Brunswick and learned about the Mi'kmaq people of Metepenagiag before heading to Miramichi.
Metepenagiag Heritage Park taught us a lot about the First Nations people that lived in Metepenagiag (Met-deh-b'-nah-ghee-agh), and about their lifestyle. For a family admission of $20, they give a tour of the interactive displays giving us a chance to gain more knowledge and ask questions. There is a 20 minute movie done by the community members that gives us an understanding of how people would have lived then. 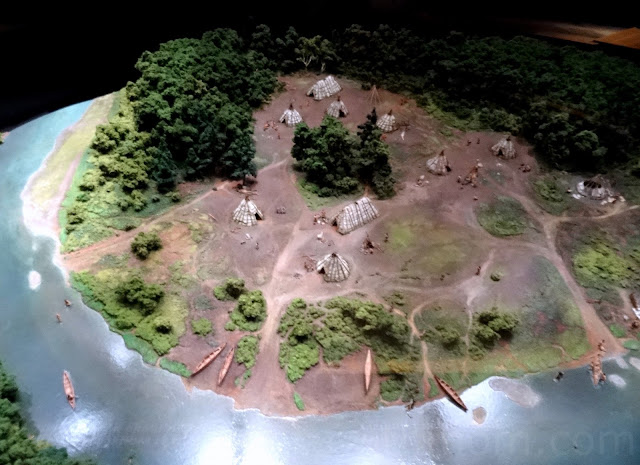 Metepenagiag is the oldest inhabited village in New Brunswick. We saw the place where the ancestors established the village 3000 years ago by the river during summer, spring, and fall. The river gave them sustenance, as there was an abundance of fish, wildlife that came to it, and thick forests that offered shelter. 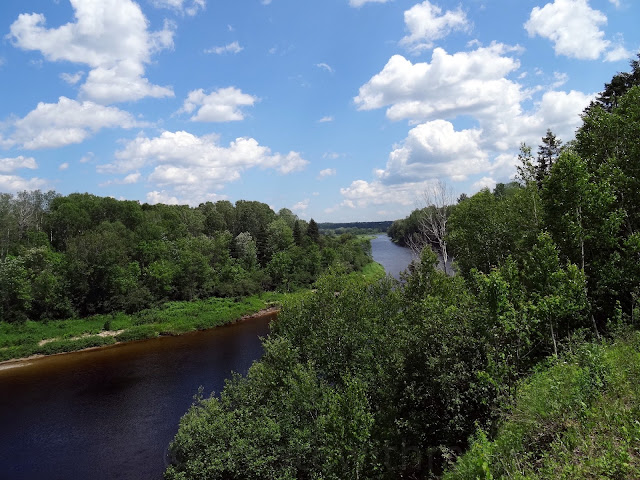 We learned about the renewed spiritually and nationally recognized heritage sites, the Oxbow and the Augustine Mound, the sacred resting place. Visiting the heritage park made us better understand and respect the past, and rekindle the valuable culture of the First Nations. 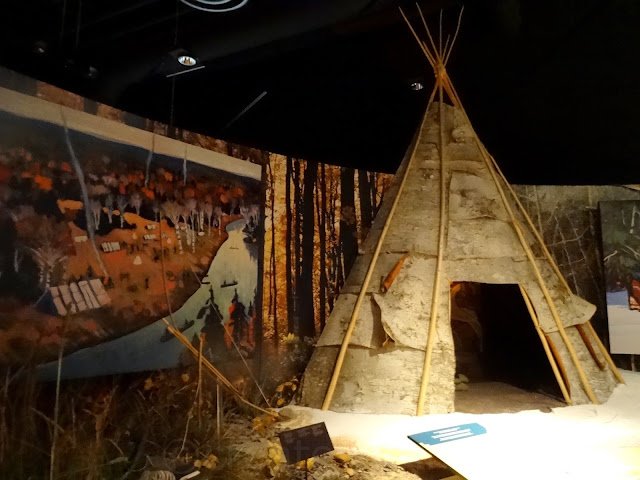 A few things we learned...
Mi'kmaq are Eastern Algonkian speaking people, closely related to the Wolastoqiyik, Passamaquoddy, Penobscot, and the Eastern and Western Abenaki which once formed the Wabanaki Confederacy. 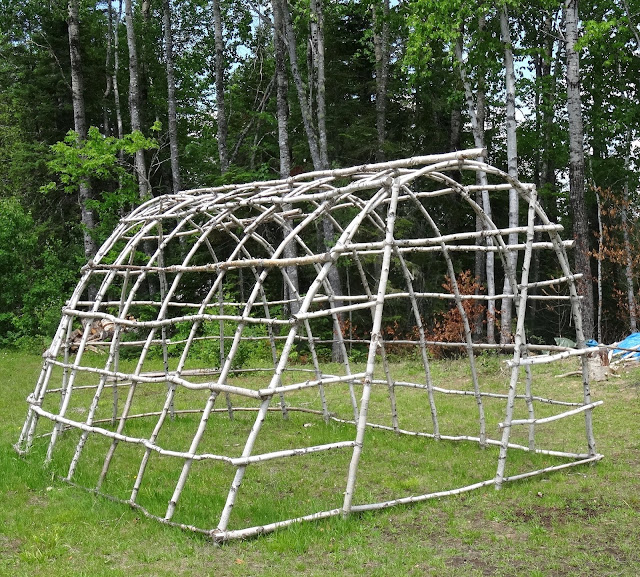 Mi'kmaq ancestors dwelled in wigwams and not in tipis. Women and girls were on one side, and men and boys were on the other. Parents and younger children were at the back, older children near the doorway. People who wanted to be left alone were against the wigwam wall, and they were only spoken to if they moved towards the central fire pit. 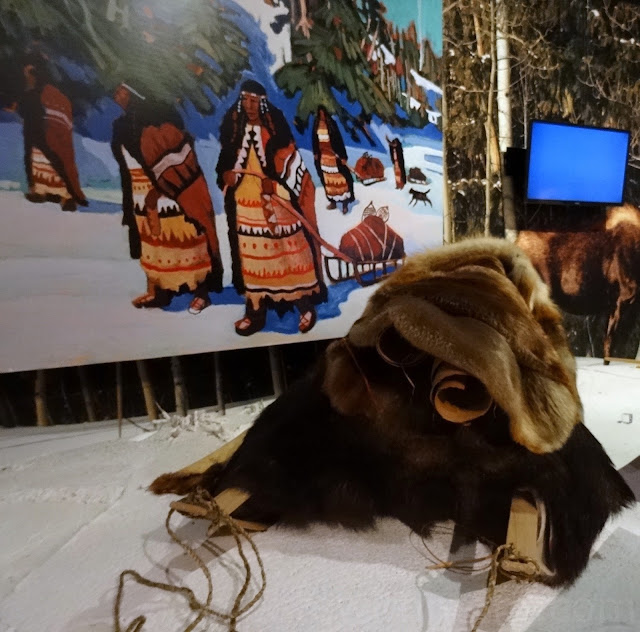 Snowshoes allowed the Mi'kmaq people to travel long distances after a snowfall, and prevented their feet from sinking deeply in the snow. The tight web gave more support and allowed the person to carry heavy loads. Hunters wanted the open web, that stopped the snow from building up on top as they chased moose and game animals. Out of respect to the animals they did not waste any part of it, as they believed the animal gave up its life so people could live. 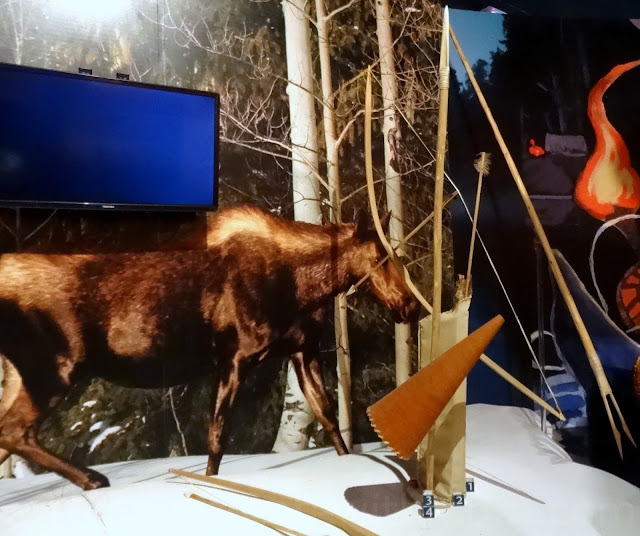 During Spring from March to April, men fished for black salmon and cod, and hunted migratory birds. From April to May, boys caught spawn filled smelt. Women and younger children gathered spring greens such as cattail shoots and fiddleheads. They collected birchbark to make the wigwams, canoes, and storage containers. Late May to early June, everyone fished Atlantic sturgeon, male eels, and salmon. Women and girls sun dried and smoked the fish.

During Summer from June to September they fished for shad, bass, gaspereau, sea trout, and shellfish. They collected clay for pottery. Women and girls gathered plants, wild fruits, and vegetables for spices, medicines, and dyes. They used Balsam fir, which helped cure wounds. Men and boys hunted birds and collected special types of stone for tool making. Large social gatherings and journeys happened in the summer for trading, marriages, and burials. 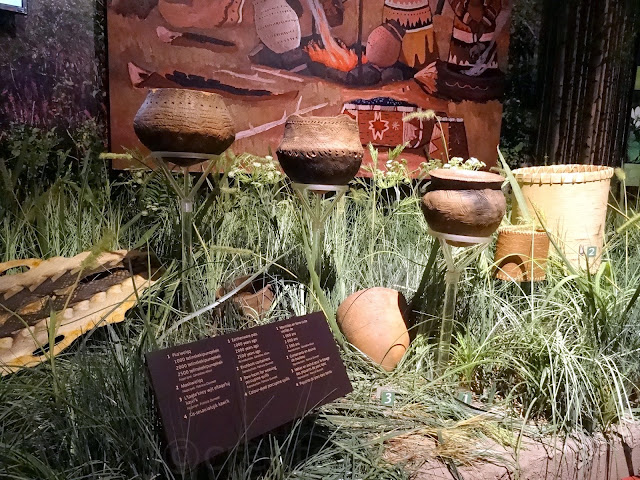 In Autumn from September to October, men hunted waterfowl along the coast. Women and children collected fruits, nuts, and grains. Salmon and sturgeon were caught and preserved. They stocked storehouses and pits with food for winter. They moved their supplies to the wintering area in the nearby forest.


In Winter from late October to March, men and boys fished for tomcod, eels, and trout. They hunted seals, walrus, small porpoises on the coast, and trapped smaller animals. Men hunted for caribou, moose, and bears before the bears hibernated. Men repaired and made sleds and toboggans, made and decorated pipes, carved utensils and fine figures in wood. Women butchered the freshly killed game, carried it to the camp on sleds and toboggans. Women and girls made clothes, sleeping robes, medicine pouches, and covers. They used delicate woven moose hair and quill to make rope, necklaces, ceremonial clothes, and did leather work. Everyone played or gambled by the fire and told stories. 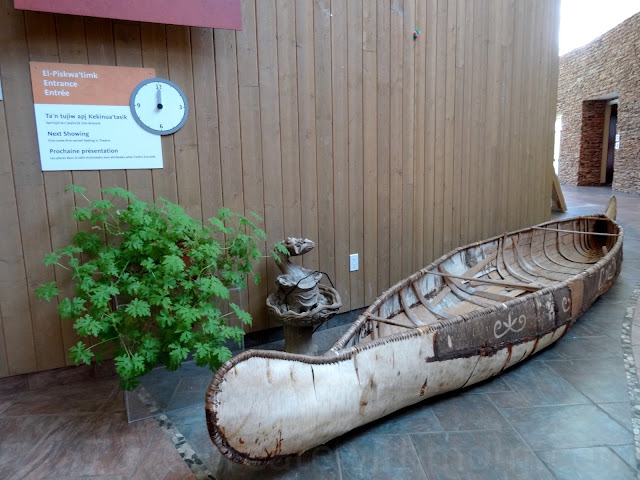 These Birchbark canoes with high ends and raised sides were unique to Mi'kmaq people. The canoes were three to eight meters in length. This design kept the canoe from taking on water, and they were able to travel out to sea, up streams, and down rapids. The canoes transported large loads, but light enough to be carried by one or two people.


European diseases killed villages, and left only a few people to pass on the tradition, in which many knowledge and history was lost. Europeans set up a commercial fishery on the Miramichi River in 1760s destroying much of the traditional salmon fishery.

Metepenagiag Heritage Park is a good place to visit to learn about the ancient Mi'kmaq culture, and look at the archeological finds, and understand the significance of the places. 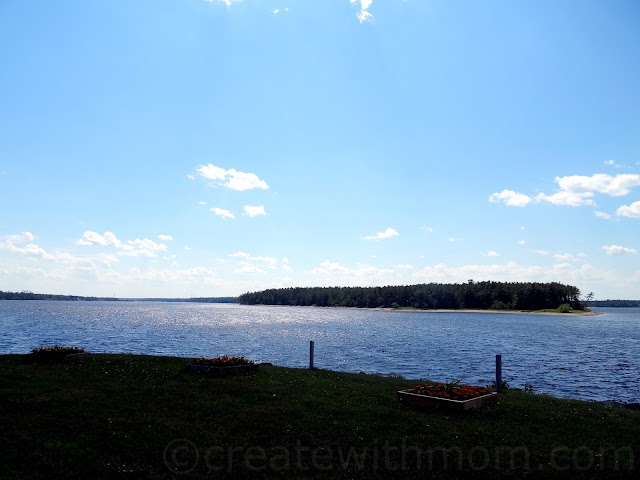 Our next stop was Parks Canada historic site, Beaubears Island also known as de l’ile Boishébert or Quoomeneegook (island of the pines in Mi’kmaq). This island was used at least 2000 years before the arrival of Europeans by the Mi'kmaq people as a meeting place for gathering food and other necessities. The island is located at the meeting point of the main Northwest and Southwest Miramichi Rivers.

This island escaped the Great Miramichi Fire of 1825 and is one of the oldest Acadian forests in the Maritimes with trees over 250 years old. French Canadian officer, Charles Deschamps de Boishébert led about 3500 Acadian refugees during the 1755 deportations. Hundreds of these people died from starvation and diseases within the years of 1756 and 1758. 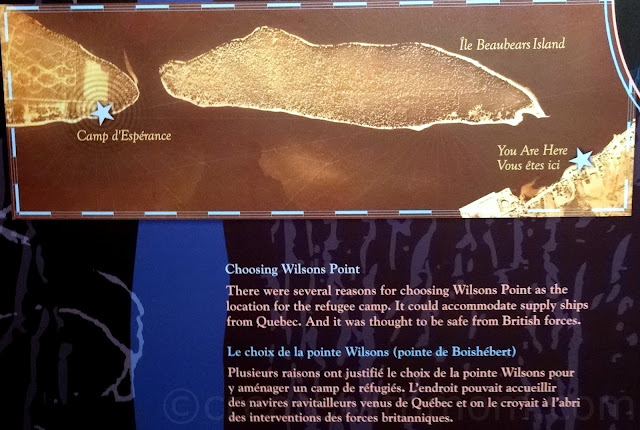 At this historic site, we enjoyed the Tours Through Time, which is free with the entrance fees or with the Parks Canada pass. The enthusiastic guide told us about the presence of the Mik'maq people in Metepenagiag, then we learned about the Acadian Expulsion to the Camp D’Esperance, and the tragedy that followed. 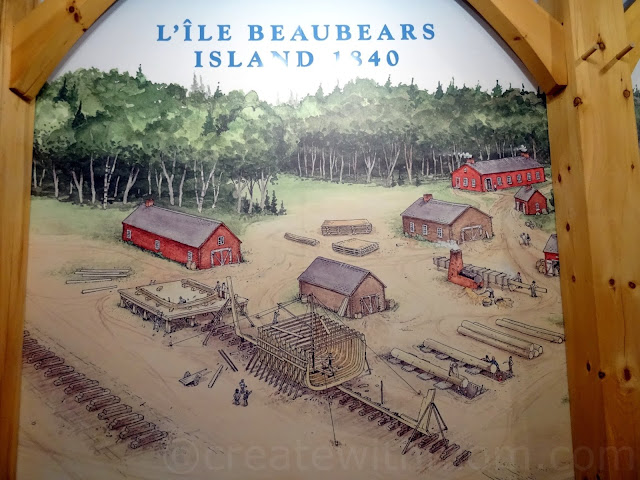 We saw how they would have used the Island from making finest vessels in the world at the shipyard in 1790 to 1866 by Scottish and Irish carpenters to using the island to have community gatherings which is still important to the Mormons. We learned about funny stories of how the island's owners kept changing, and how the final sole owner of the island J. Leonard O'Brien gave it to the queen, who gave it to the Canadian government which is now a site for all the people in Canada. 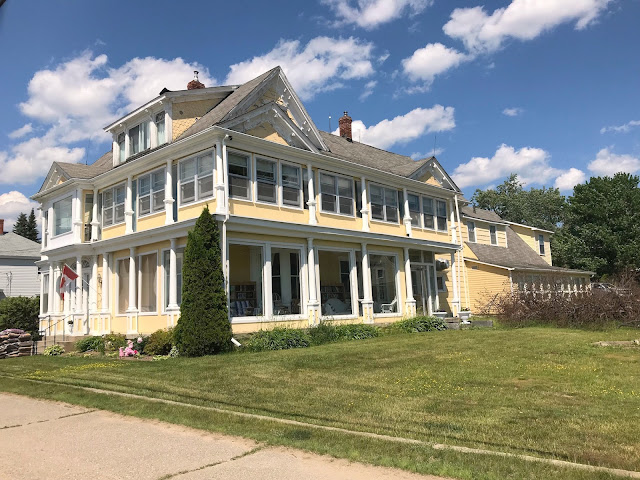 This is a historic home built in 1880 by Thomas Dolan, Jr. for lumber baron John O'Brien. O'Brian's son J. Leonard O'Brien served as New Brunswick's Lieutenant Governor and the house remained in the family until 1973. In 1976, it became the Governor's mansion. Today, this Victorian era mansion is an inn.

They have canoe and boat tours to take us to the island, where we can walk the historical trail that follow the perimeter of the island. The island is 2.3 kilometers long and 0.5 km wide at its widest point. There are 34 species of birds, a population of red fox, and a total of 323 vascular plant groups (club-mosses, horsetails, ferns, trees, shrub grasses, sedges, rushes, and wildflowers), in which 254 are native and 69 are introduced.

We highly recommend visiting this Parks Canada site, as it gives a wealth of knowledge about the area's past and present. 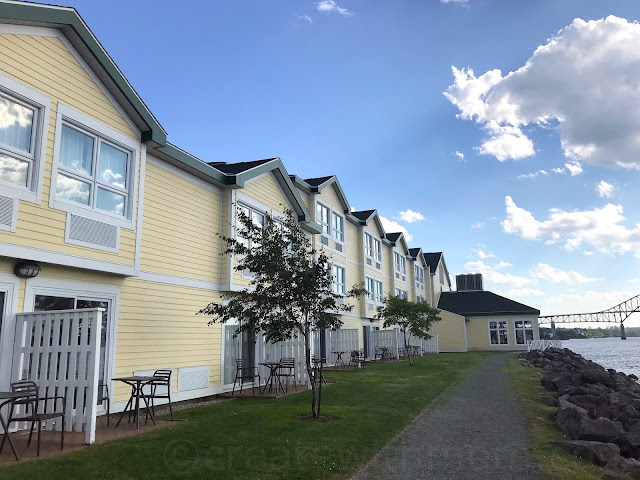 In Miramichi, we enjoyed an overnight at the Rodd Miramichi hotel overlooking the Miramichi river and the Centennial Bridge. 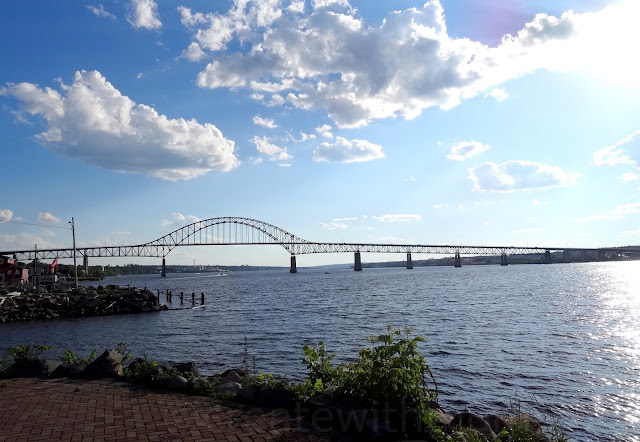 We enjoyed the walk out to the patio, which has two chairs and a table, which was a perfect place to lounge and look at the beautiful sunset and the calm waters. 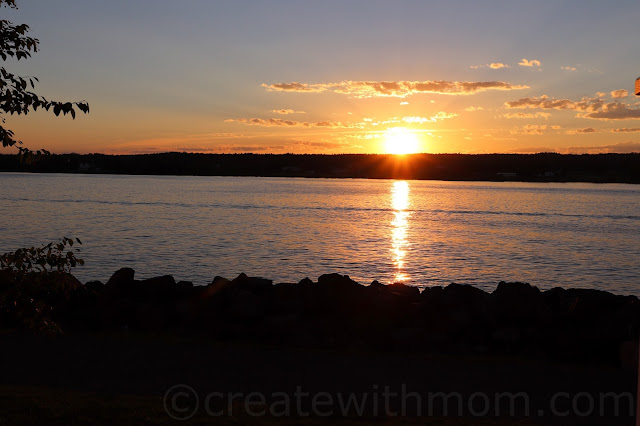 The room was comfortable and has a microwave, fridge, coffee machine. The bathroom has all the basics. 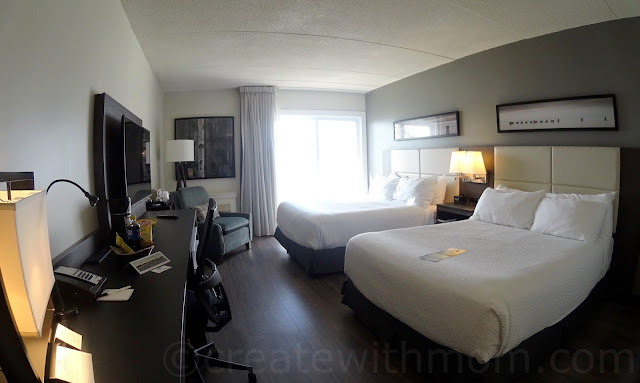 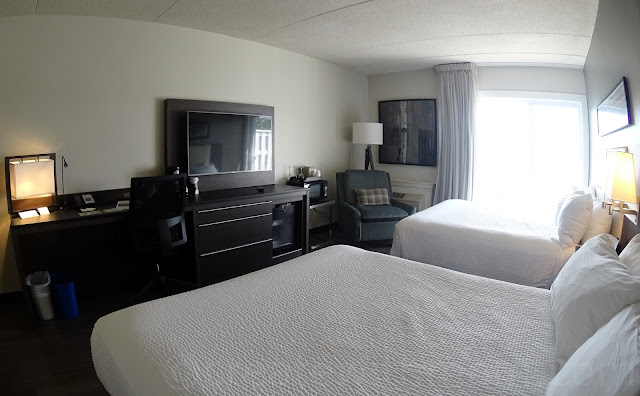 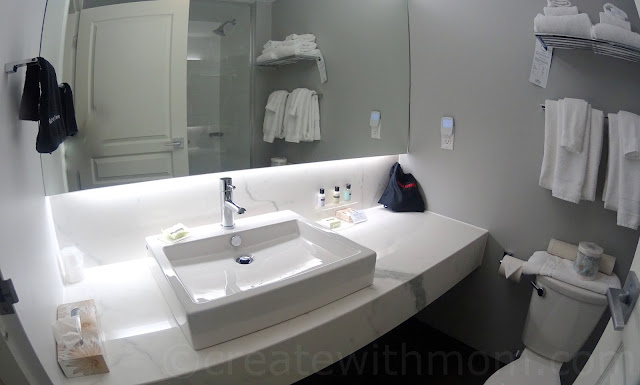 We had breakfast at the 1809 restaurant in the hotel. They have different options in their menu. We wish the service was a little faster. 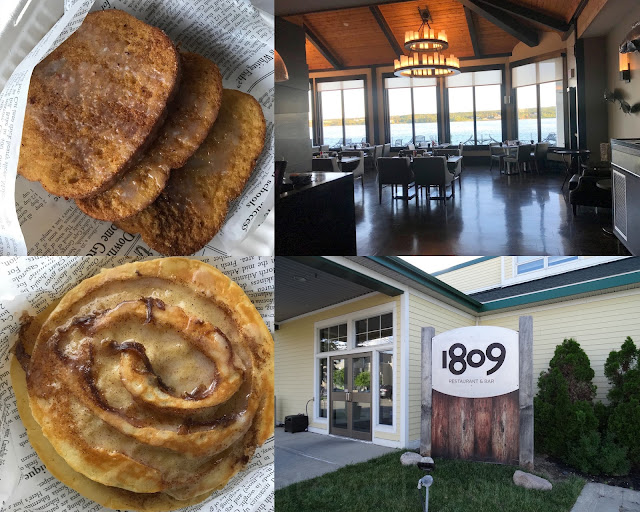 There are facilities such as a fitness room and a pool in the hotel. There is a playground nearby for children by the wharf. Overall, we like the location of the Rodd Miramichi as it is right downtown close to the wharf, where we enjoyed an evening stroll. 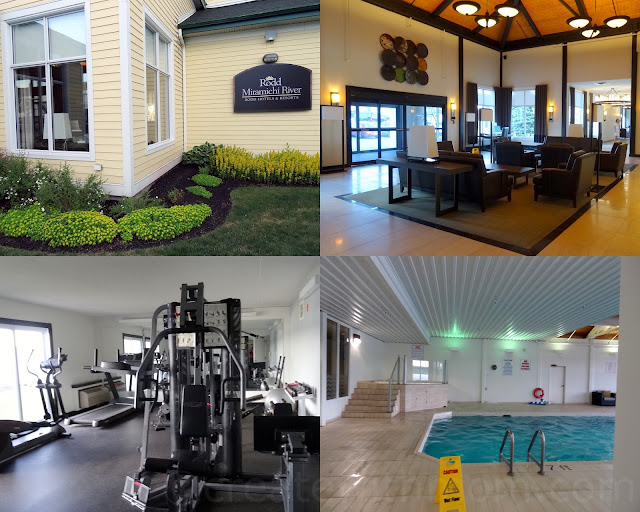 From the hotel we went directly to Kouchibouguac national park, which is 45 minutes from the hotel.

At Kouchibouguac national park, we enjoyed the three and half hour voyageur canoe adventure led by Victor Savoie. This canoe trip is amazing, if you want to experience this you have to book it ahead of time through Parks Canada and prepay. It costs $29.40 per person. They only have one trip everyday from 8 to 11:30 a.m. and the interpretations are either in English or French, so find out when booking what language the tour are conducted in.

Before we started our canoe adventure we were told about canoeing basics, and some of the information on what we would see. While we canoed, were were told more about the area, the livelihood of the First Nations people, how they fished and canoed, about the lobster industry after the settlers came, and how the industry has changed. We got to see pictures of how the site was when the lobster industry was running on the river. Now this site is protected by Parks Canada. We were also told about the different types of animals we saw such as the grey seals, terns, eel, fish, jelly fish. 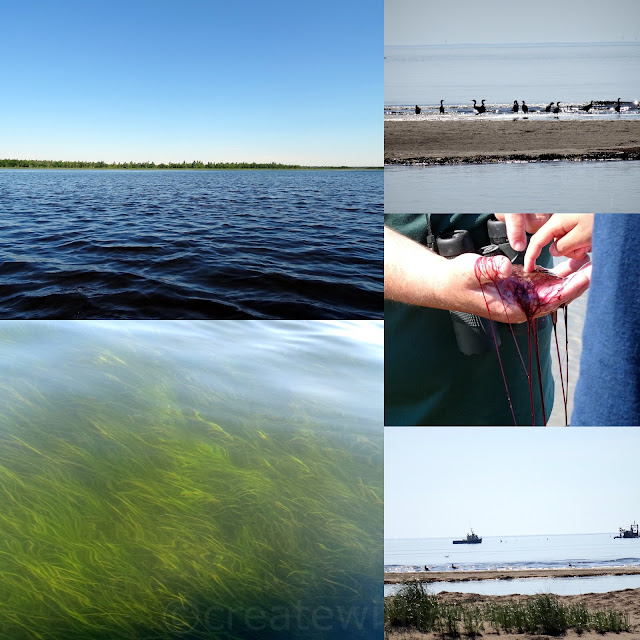 During the three and half our journey we paddled the canoe about five times in different segments ranging from 20 to 10 minutes each time. We liked sitting in the canoe over the lagoon and looking at the plankton, crab, and shells. It was fun to paddle to the sandy barrier islands with other adventurers. We saw terns coming to fish for small fish and flying away with a fish in their mouth. With the binoculars they provided we saw colonies of grey seals. There are ospreys and bald eagles, and marine animals such as fish, eel, crab, and jellyfish. The voyageur canoe adventure is a must-do! 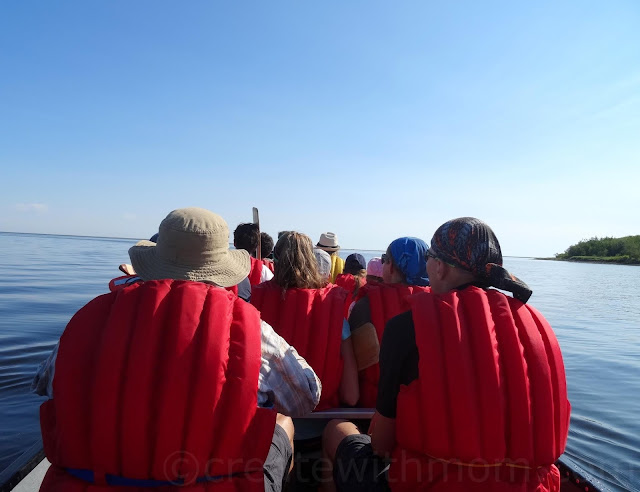 All rights reserved on photographs and written content Createwithmom © 2010 - 2018. Please Ask First Please note that all opinions and thoughts expressed are my own.