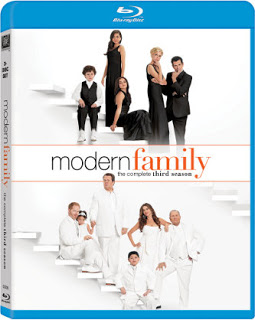 Join TV’s #1 family for another hilarious season of “Modern Family”!  As the extended Pritchett/Dunphy clan faces an uproariously unpredictable array of family vacations, holiday hassles, troublesome in-laws and surprising secrets, they still somehow manage to thrive together as one big, loving family even as they drive each other absolutely insane.
Modern Family season 3 has won the 2012 Emmy Awards for:
If you would like to win a copy of the blu-ray for Modern Family season 3 please enter through the rafflecopter below.  The giveaway is open to people in Canada and US, ends on December 1st.
Update: The winner is William
a Rafflecopter giveaway
All rights reserved on opinion of the written content Createwithmom © 2012. Please Ask First