Win Your Own Copy of the book If a T. Rex Crashes Your Birthday Party 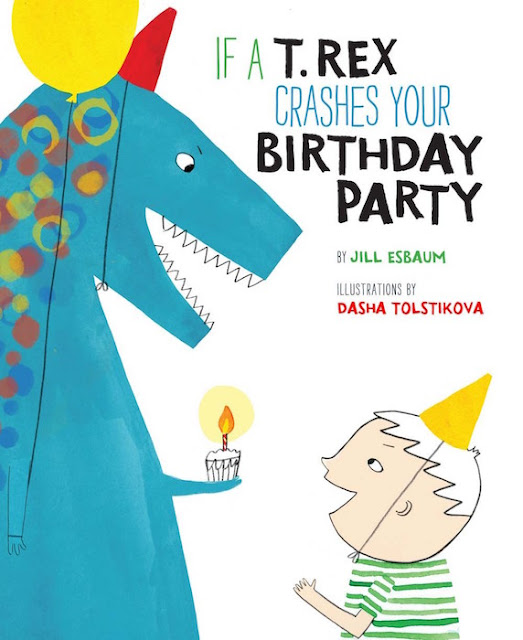 If a T. Rex Crashes Your Birthday Party by Jill Esbaum and illustrated by Dasha Tolstikova is a delightful whimsical picture book that has a fun twist that children will enjoy reading. My children enjoyed the colourful illustrations that went along the beautiful storyline, which they found to be funny and creative.

The book is about a T. Rex turning up at the door of a birthday party, where the child is initially excited. However, when he stomps and roars it is not as fun. The book makes comparison of T. Rex's size to a school bus, and how it would effect us if a T. Rex was part of the party such as playing on the bouncy castle might not be easy -as it could deflate, and the T. Rex might have some trouble hiding when they play Hide 'n Seek.

The storyline takes children through the fun games that they may have encountered during birthday parties, and how a T. Rex joining it could alter these games. In the end, when the child says goodbye to the T. Rex and gets a hug, he still wants the T. Rex to be back for this next birthday despite the tantrums of the T. Rex he had to deal with.

This book could teach young children a few skills like comparisons to size, as well as comparing reality to imagination. I found this book to be an asset in having creative thinking discussions such as how a normal day may differ if an animal like a friendly T. Rex were to join. It could also teach no matter what is said or done a warm and kind hug can overcome problems we may have between each other.

Giveaway:
If you want to win this book enter the giveaway through the rafflecopter below before September 15th. This giveaway is open to everyone in Canada and USA. Please leave comments and follow my social media networks to be eligible to win.
Update: The winner is Cami

a Rafflecopter giveaway
All rights reserved on photographs and written content Createwithmom © 2010 - 2016. Please Ask First Disclosure: For reviews/ sponsored posts I may have received special perks as part of my affiliation, all opinions and thoughts expressed our my own