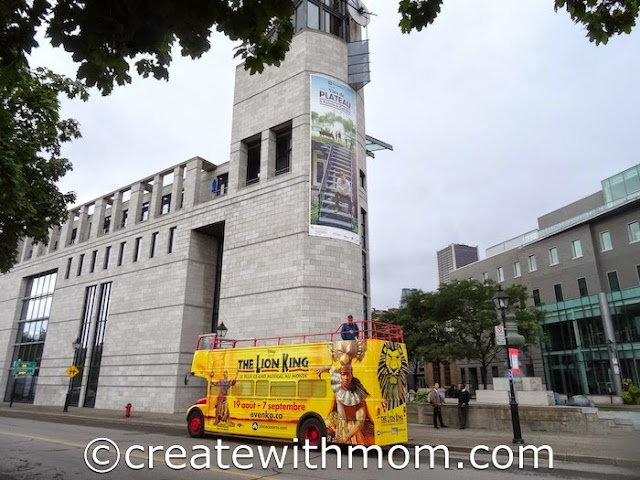 There are so many places to see within downtown Montreal, and I am glad we went to check out the Pointe-à-Callière Montreal Museum of Archaeology and History that had the temporary exhibit of the epic journey of Marco Polo, as well as many fun permanent exhibits. It was fun for us to learn and see how the archaeologist go deep underground. 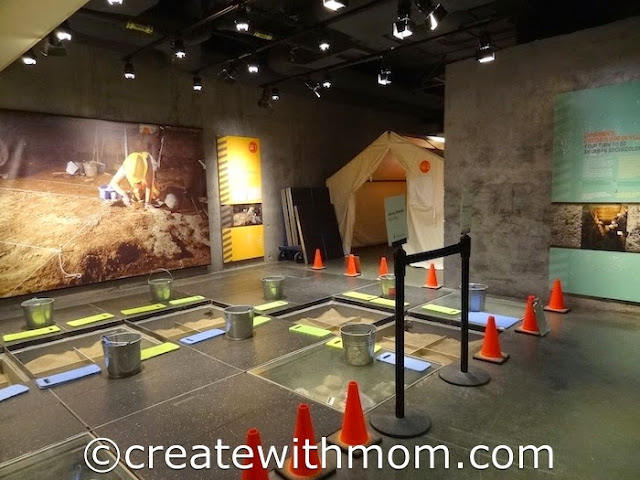 It was interesting for us to explore the Archaeo-Adventure workshop, exclusive to Pointe-à-Callière, that gives young people and families a chance to experience a simulated archaeological dig, first on the site, then in the head archaeologist’s tent and the laboratory space. This space in the basement of the Mariners' House is a very realistic reproduction of a dig site, offering visitors an unusual and rewarding scientific experience. The environments allows us to step into an archaeologist’s shoes and head off to find authentic remains and artifacts buried in the soil, while discovering all the secrets the past has to reveal. I like that it allows us to find out how people lived in Montréal in the 17th, 18th and 19th centuries. 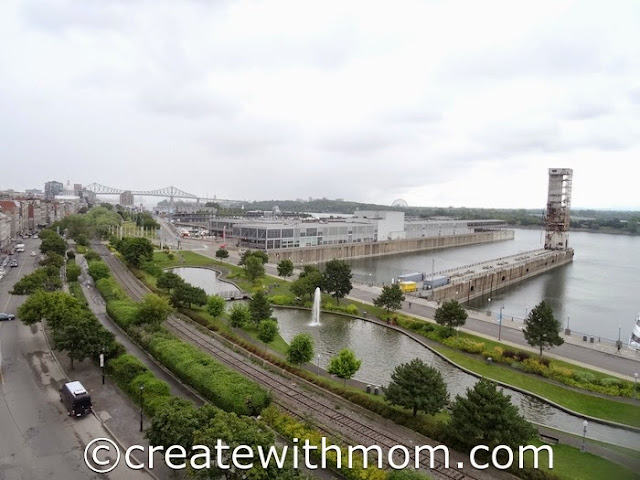 a view from the top floor of Pointe-à-Callière
There is a multimedia presentation on the history of Montreal that happens every half hour. Presented in the Hydro-Québec multimedia theatre overlooking the archaeological remains. This 270º screen puts us at the centre of a spectacular immersive experience, and the powerful and evocative images takes us to moments in the history of Montréal and its development such as about the birth of Mount Royal, the arrival of the Amerindians, the founding of Montréal, French and British regimes, the modern era and the development of networks. 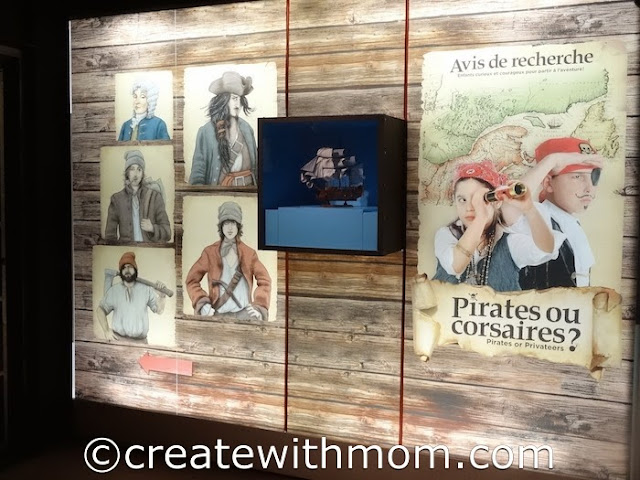 My children's favourite was the Pirates or Privateers permanent exhibition that is made and presented for children 6 to 12 years and their families to explore.  It allows the curious and courageous young people on an adventure, as children get the opportunity to discover and measure themselves up to the rough and ready sailors who scoured the St. Lawrence River in the days of New France. The interactive and immersive environment of the privateer ship  is very exciting, as it brings to life the world of Montréal privateer Pierre Le Moyne D’Iberville. The set resembles the time during the Franco-British war in the late 17th and early 18th century, where the armed vessels manned by individuals who possess an authorization from the King of France to attack enemy trade ships. 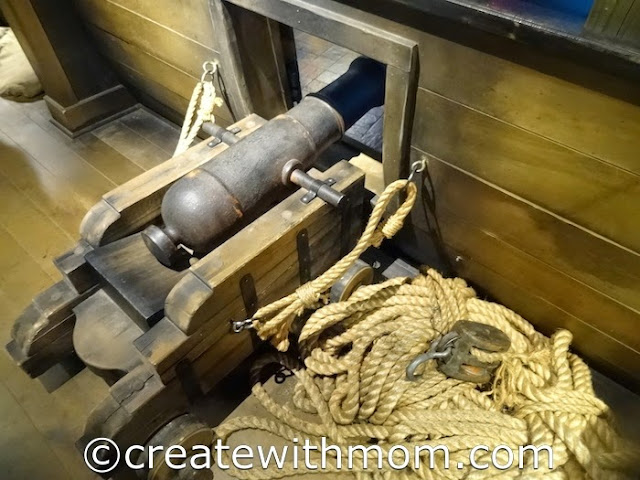 Wondering what the difference between Privateer and Pirate... well although pirates and privateers dealt with very similar challenges, one group worked legitimately while the other didn’t. Privateers were sailors on armed civilian ships that, in times of war, were authorized by their government with a “letter of marque” to attack any ship that has the flag of enemy states; in particular, merchant traffic. Pirates, on the other hand, were seafaring adventurers who sailed the waters attacking trade ships and stealing their booty, and who sometimes even attacked small seaside towns. Pirates are considered to be bandits of the seas. 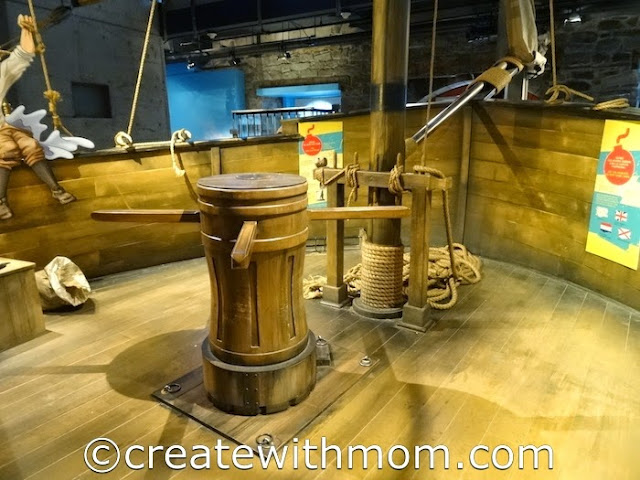 The exhibition explores various aspects of the privateers’ daily lives, such as their diet, their duties while aboard a ship, and the punishment to which they were subjected. The exhibition features several objects and artefacts, including navigational instruments, personal objects, tools, weapons, and the things they brought back from expeditions at sea. 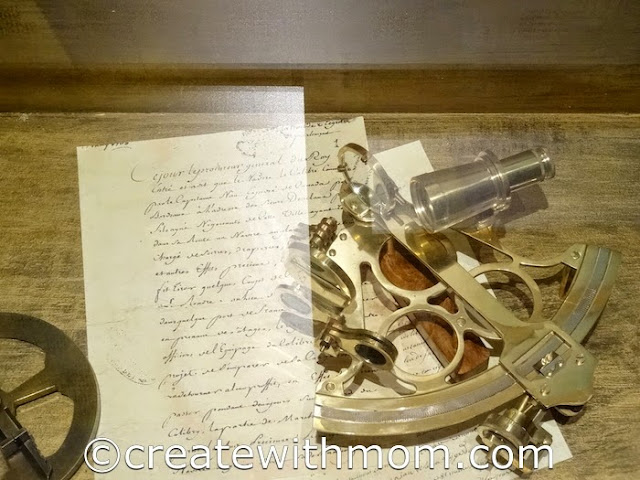 We were glad that during our visit we were able to see the Marco Polo exhibit that transports visitors to the 13th century, taking them from Venice to China, along a route so astonishing and exceptional that it is still being discussed over seven centuries later. This event demonstrates the immense impact of the journey described by Marco Polo in the Description of the World, as his accounts allowed for the development of map-making, which in turn led to major exploration of the globe beginning in the 15th century.

If you are planning on visiting Montreal, check out my posts about the view of Montreal from Mont Royal, and our stay in Downtown Montreal, and how we explored the "underground city," which is the large network of pedestrian walkways below the city with many hotels, museums, theaters, and universities can be found. We enjoyed the European Parisian feel when we went to Old Montreal, which had three and half century old cobblestone streets, and galleries, boutiques, terraces and cafes that were inside 18th and 19th century buildings. 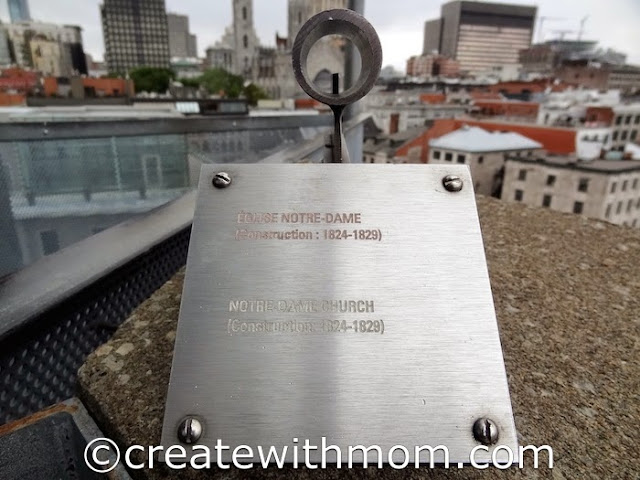 I think the best way to explore Montreal is with someone who knows the inside and out, so make sure to look for a professional tour guide on their tourism guide and get to know everything about the city, from its history, shopping, cuisine, architecture and more.