Win A Bluray Copy of Turbo 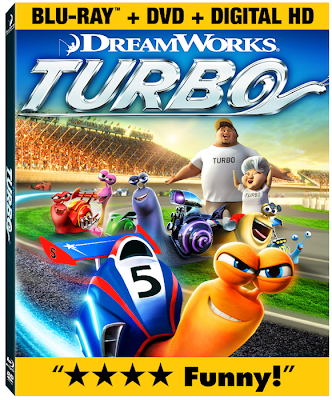 Laugh it up with the visually stunning, heartfelt comedy-adventure for fans of all ages this holiday season when Turbo becomes available on Blu-ray and DVD on November 12th.
Turbo directed by David Soren and from the team behind family favourite movies like Madagascar and Kung Fu Panda has received outstanding audience reaction as a fun family movie. Laugh-out-loud performances from an incredible voice cast of Ryan Reynolds, Paul Giamatti, Michael Peña, Snoop Dogg, Maya Rudolph, Michelle Rodriguez and Samuel L. Jackson.

Turbo is courageous story of a little snail with the big dreams of becoming a racecar. Despite the discouragement he receives from his peers, Turbo knows what he is capable of. After an accident this snail miraculously gains power to have super speed so he wants to embark on an extraordinary journey to compete in Indianapolis 500.
My family and I really enjoyed watching this fabulous movie, there is lots of comedy and reminded the adults of Fast and the Furious in some scenes. My children were in the edge of the seat during some scenes and kept cheering for Turbo to win.

Here are some fun snail facts so you can understand the ins and outs of Turbo and his gang.
1. Salt is a snail’s biggest enemy. In the film, Chet falls down the stadium and just barely makes it through the center of a pretzel. He was so relieved he didn’t touch it, because salt can kill a snail, so they have to be careful.
2. It would take a snail two hours to move from one side of a football field to the other. That’s 50 yards per hour. If you ran your fastest, it would only take about 20 seconds.
3. Some snails can be as big as 12 inches. Can you imagine a snail the size of a ruler?
4. Garden snails have thousands of teeth, located on their tongue.
5. Snails do not have ears, but they sure can smell. That is how they find their fruits and veggies to eat.
6. Snails can live to be up to 20 years old.
7. Snails are nocturnal that means they sleep during the day and get their work done at night and in the morning. No wonder Turbo could stay up all night watching Racecar videos.
8. A garden snail can have as many as 430 baby snails in a year.
9. Garden snails hibernate in their shells during the winter, and some hibernate during the summer too.
10.When a snail moves, it leaves behind a trail of liquid slime. This mucus protects them from the hard surfaces underneath them. Snails are able to hang onto walls and move upside down thanks to this slime. 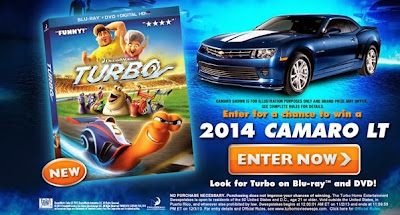 To celebrate, fans now have a chance to win a brand new 2014 “Blu-ray Blue Metallic” Chevy Camaro. Starting this week, the top-selling Turbo Racing League app will play host to a four-week tournament where players will have a chance to win a free Digital HD download of Turbo.
One lucky grand prize winner will win the 2014 "Blu-ray" Metallic Camaro LT with white racing stripes, valued at $30,000. The Turbo Racing League app has logged more than 30 million downloads worldwide, and is the #1 racing game on all mobile platforms (iOS, Android, Windows Mobile). The app was just updated with all-new features where users will now be able to play as Turbo or Whiplash. If you aren't one of the 30 million, you can download the app here and join in the fun.

Giveaway:
One person in US and Canada can win this Turbo bluray before December 5th by entering the giveaway through the rafflecopter below.  Please leave comments and follow my social media networks to be eligible to win.
Update: The winner is Robyn
a Rafflecopter giveaway