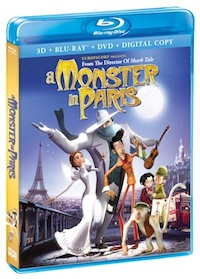 On April 16th the internationally acclaimed film written and directed by Bibo Bergeron A Monster in Paris will be released.
This movie is set in the 1950s Parisian cityscapes. The story is about Emile and Raoul accidentally creating a "monster" after having free reign in a scientist's laboratory and spilling potions. Monsieur Francoeur, the monster, is the product of a reaction between a common flea and one of the scientist’s mystery concoctions.
Everyone in Paris except for Lucille, Emile, Raoul, and the scientist's monkey fail to realize that this "monster" is actually a soft-centered soul with an astounding talent for music. The stories of Paris’s newest monster attract the attention of the egotistical police commissioner who wants to become mayor. Emile and Raoul team up with the singer Lucille to protect Francoeur.

The movie delivers a vibrant storyline packed with elegant characters, unforgettable song-and-dance musical numbers and beautiful CG animation that the whole family will enjoy. We enjoyed the songs so much that we watched it many times.


This critically acclaimed international major motion picture also features enchanting vocals by Vanessa Paradis and Sean Lennon, with music score by popular French singer/songwriter Matthieu Chedid (aka M) and Patrice Renson.
A Monster in Paris is a funny movie with cute romance, which taught us that not everyone who looks like a monster is a "monster".


Here are some printable recipes from French cuisine for you to make and enjoy with your family, while thinking of La Seine and the city of romance, Paris.