Adventures for little ones from Shout! Factory 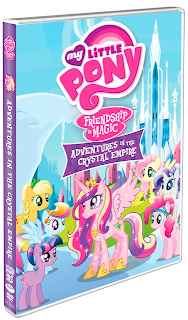 My little pony is one of my children's favourite toys so we are excited about My Little Pony Friendship is Magic: Adventures in the Crystal Empire coming on DVD December 4th.

This DVD is about the magical empire that appears in the arctic north of Equestria.  Princess Celestia needs Twilight Sparkle and her friends to find a way to protect their empire.

and bonus features that include sing along and colouring sheets.
We can preorder this DVD on Amazon so it will be available on time to give as gifts :).

Watch for Littlest Pet Shop: Little Pets, Big Adventure that will be available on January 15th.  We can already start to preorder this first DVD collection based on Hasbro's popular Littlest Pet Shop brand toys.  This animated series premiered on November 10th on Hub TV in the US.
Littlest Pet Shop is an animated half-hour comedy series that follows Blythe Baxter and her father as they move into a Big City apartment above the Littlest Pet Shop store, which is an amazing day camp for pets of all kinds including a doggie diva, dancing gecko, a sweet, adorable panda and others.
The real adventure begins when Blythe discovers that she can understand and talk to all of the pets. Blythe joins the pets on fantastical adventures that include uproarious song and dance sequences.

All rights reserved on opinion of the written content Createwithmom © 2012. Please Ask First