Ontario Parks we explored this summer 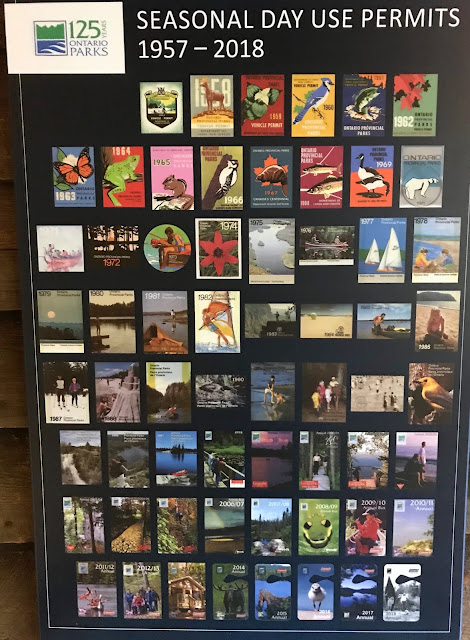 We enjoy spending most of our time outdoors in the summer, visiting different Ontario Parks during our road trips have become a tradition. Having an annual park pass helps to stop by at different parks! Here are a few of the Ontario Parks we explored this summer in the Kawartha, Ottawa Valley, and Sudbury regions: Bon Echo, Petroglyphs, Silent Lake, Frontenac, Windy Lake, French River, and Samuel de Champlain provincial parks. 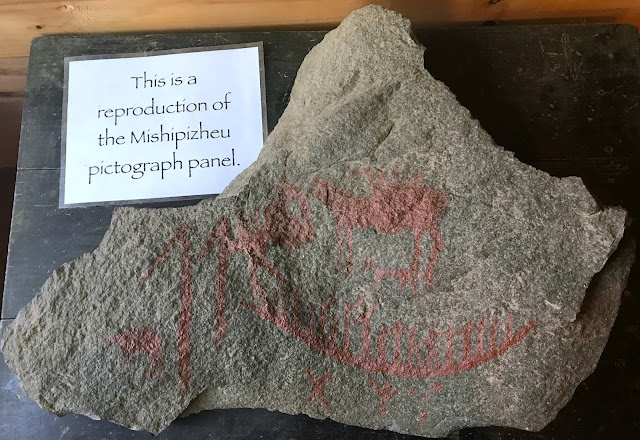 Bon Echo Provincial Park has 20,000 acres of park boundary to protect the diverse ecosystems, human history, and rugged beauty. We went for a day excursion especially to see the Mazinow rock, and once there we found that there is so much to do at this park! 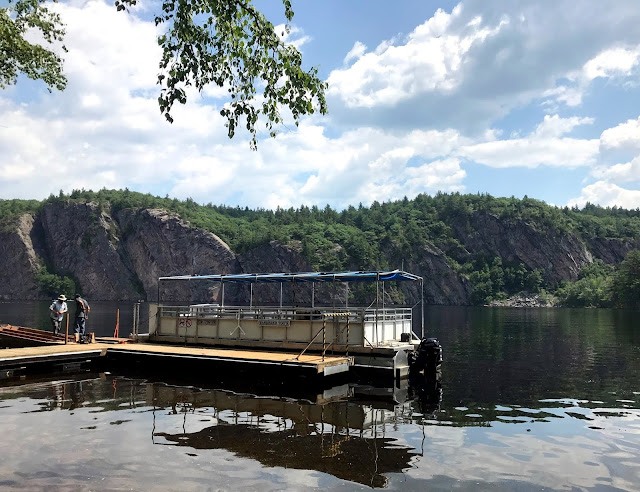 The spectacular view of the Mazinaw Rock began forming 1.2 billion years ago is one of the main reasons we wanted to stop by at this park. The rock consists mainly of granite, which was formed by a process called faulting. This 15 km long granite cliff is over 100m above the Mazinow lake. There are over 260 Indigenous pictograph on this rock painted by Algonkian-speaking peoples using red ochre, a substance created by grinding iron rich hematite into a floury powder and mixing it with fish oil or animal fat. The pictographs dates between 300 to 1000 years - these reddish-orange images can be seen just above the waterline. 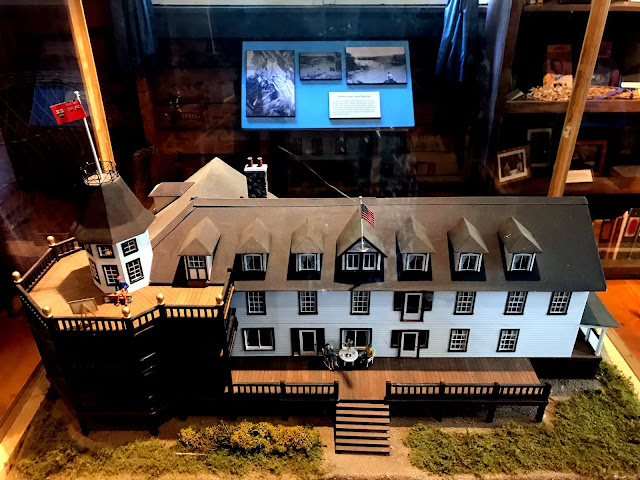 There had been an inn at Bon Echo which was bought by Flora MacDonald Denison, a Toronto feminist in 1910 to create a wilderness retreat inspired by the philosophy of American poet Walt Whitman. The guests were offered painting lessons, amateur theatre, and poetry readings. We can see the 1920 inscription of "Old Walt" commissioned by Flora MacDonald as she supported Whitman's democratic views. Flora's son Merrill Denison inherited the resort in 1921 until its closure in 1928. It burned down in 1936, and now only a few buildings remain, which includes the Visitors Centre.

We can explore the lake and the rock either on our own or take an interpretative boat tour of the lake for a fee. If you enjoy fishing, Shabomeka Lake and Mazinaw Lake are perfect to fish Largemouth and Smallmouth Bass, Walleye, Perch, Pike, and Lake Trout - check with regulations and park office before fishing. They also have opportunities to rock climb, canoe, kayak, a beach area and more. The visitors centre at this park has a wealth of information - a good learning experience! If you plan to stay overnight there are 530 campsites including cabins, yurts, exploration tents, car campsites, canoe and hiking trails accessed backcountry campsites. 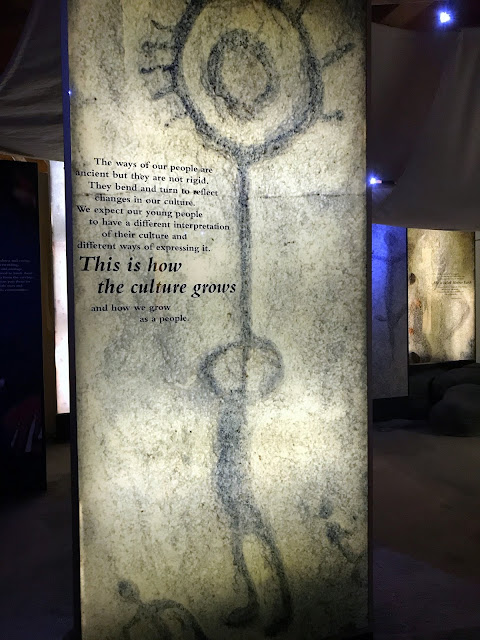 Petroglyphs Provincial Park has teaching rocks with more than 300 images carved over 1100 year by Indigenous people. We are not allowed to take pictures at this site because it is sacred for Indigenous peoples. 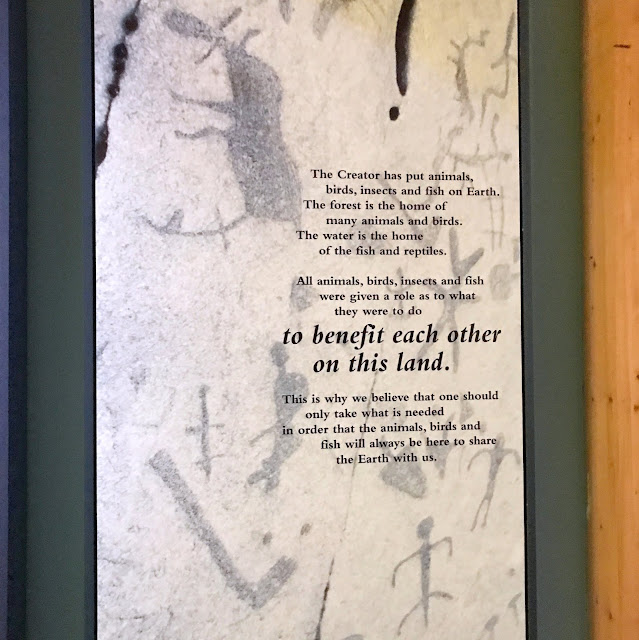 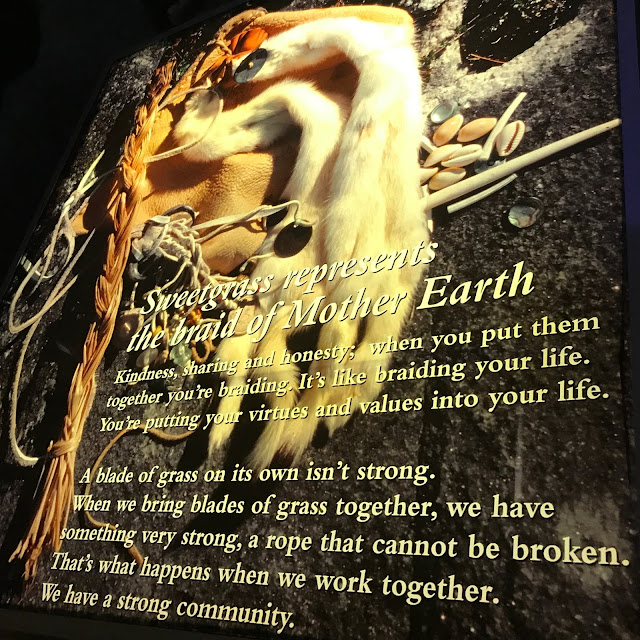 At the Silent Lake Provincial Park we enjoyed watching the beautiful Silent lake early in the morning. Due to amount of mosquitos we started the hike, but turned back. There are canoes and kayaks which can be rented to enjoy the peaceful Silent lake. 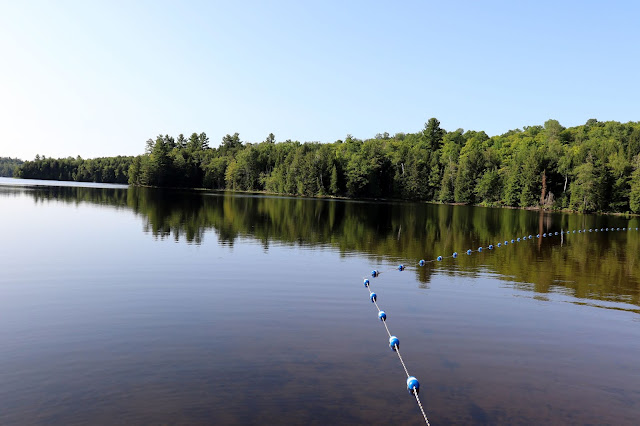 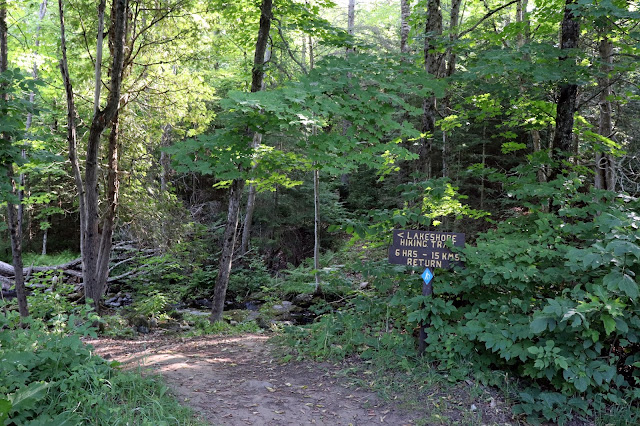 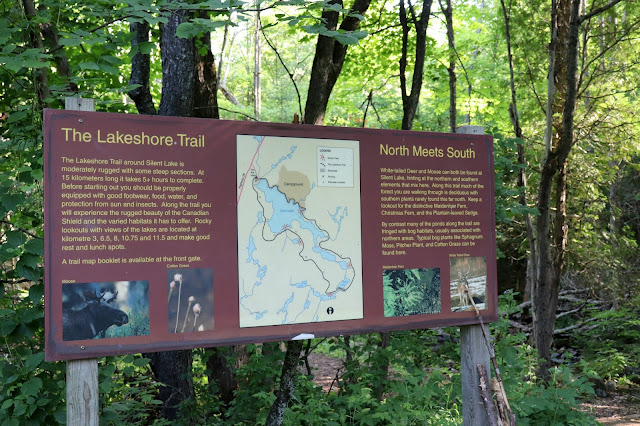 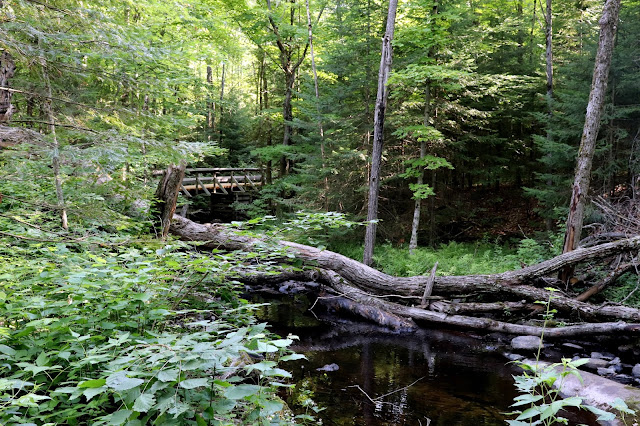 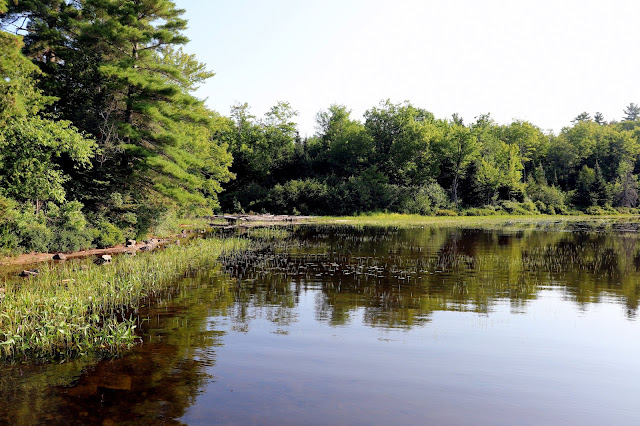 Frontenac Provincial Park established in 1974, a place to try wilderness camping and learn outdoor skills. There is something different for every season at Frontenac. This park is recognized as UNESCO  world biosphere reserve as it hosts flora and fauna not often found in other parts of Canada. This park is wonderful place to do backcountry camping. 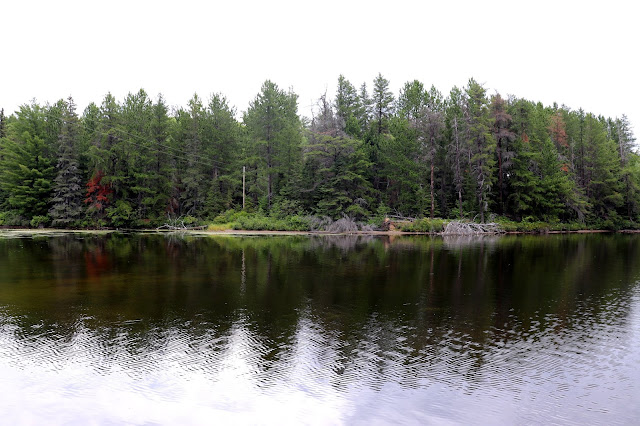 Windy Lake Provincial Park is a park in the Sudbury Region. It was developed as a picnic stopover, and is a popular destination for swimming and camping in Northern Ontario. The shape of the lake was referred to as Makoping by Ojibwa people meaning "place of the bear paw" as they used the shores of Windy Lake for hunting, fishing, and picking berries. 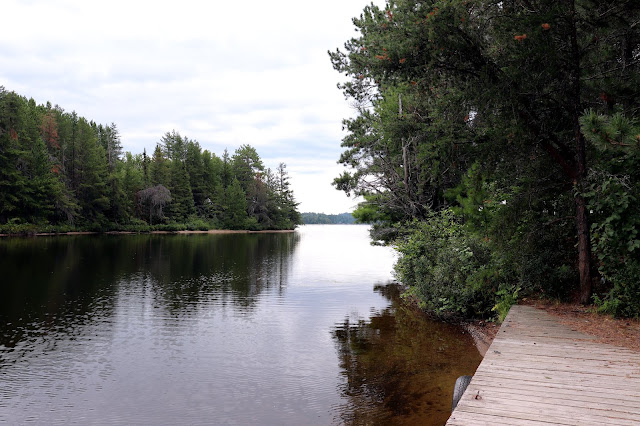 We learned a lot about the history of the region and different characters such as Samuel de Champlain and Étienne Brûlé at the French River Provincial Park visitors centre. The French River flows for 105 kilometres from Lake Nipissing to Georgian Bay. 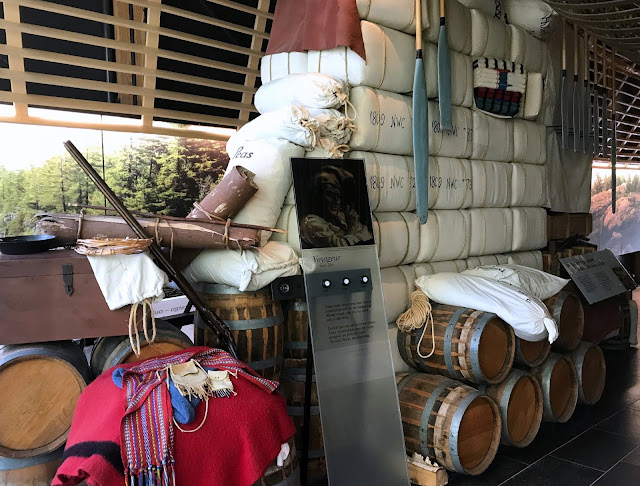 Thousands of years before Europeans arrived, Aboriginal people followed the river to fish, hunt, and trade. During the 1600s this river opened North America to French explorers, and Jesuit missionaries. 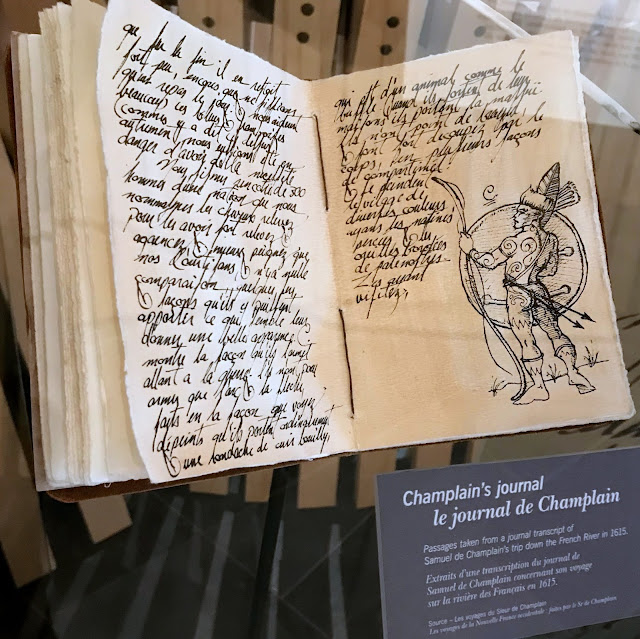 When fur trade receded, the timber barons took over sending rafts of red and white pine south of the river. French River Provincial Park is a protected place for the Massasauga Rattlesnake. 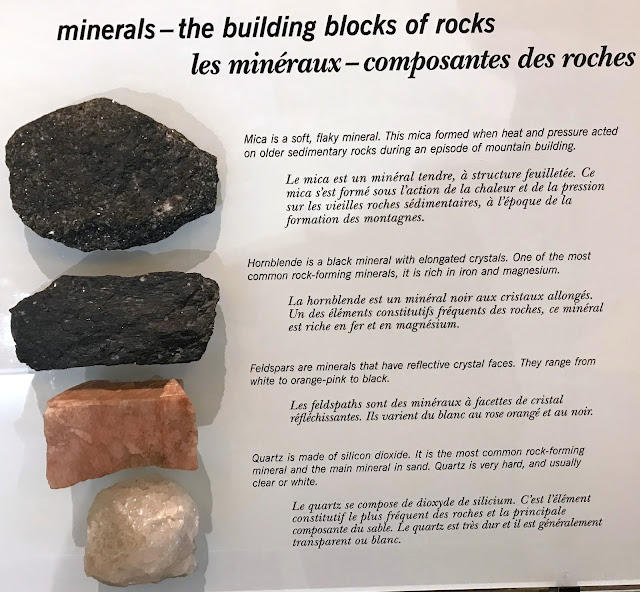 There is a lot to learn by going to the Visitor's Centre at Samuel de Champlain. We learned how the beaver in Ontario was brought to near extinction by the 1840s from as many as 400 million because of intensive trapping for fur trade, which changed the landscape dramatically. 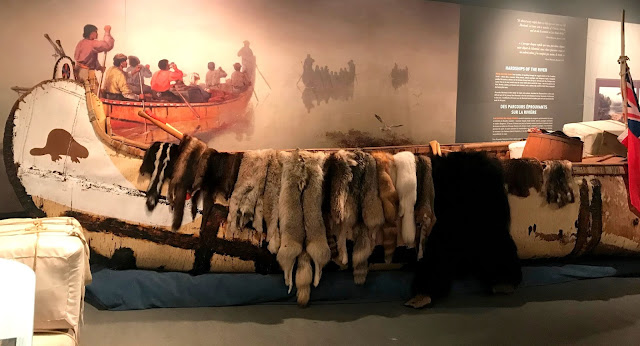 With the beavers gone, the dams on cold water streams fell apart and many wetlands and habitat disappeared, which reduced the network of canoe routes. The Anishinabek found it difficult to travel, the food was scarce, and there weren't any fur to trade. 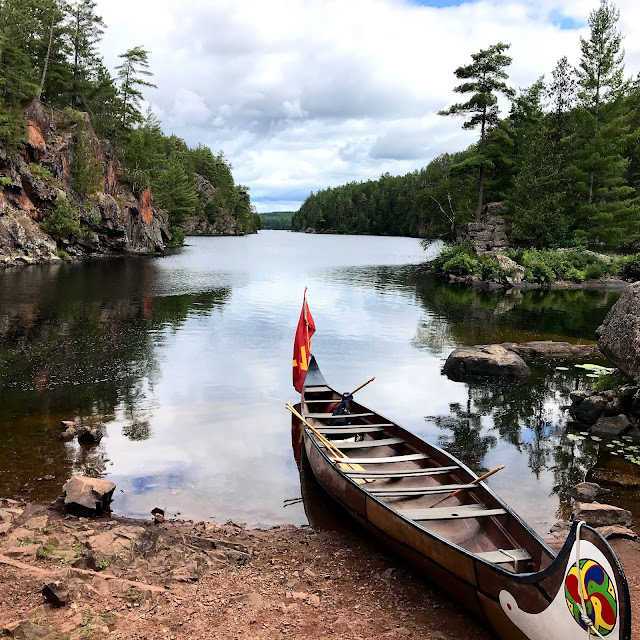 We had an amazing time during the 3 hour voyager canoe Chutes Tour at Samuel de Champlain. We started our tour about 10 minutes away from the park at Pimisi Bay. This tour costs $25 per adult and $20 per child. They also offer other tours for shorter time frames and lower fees. 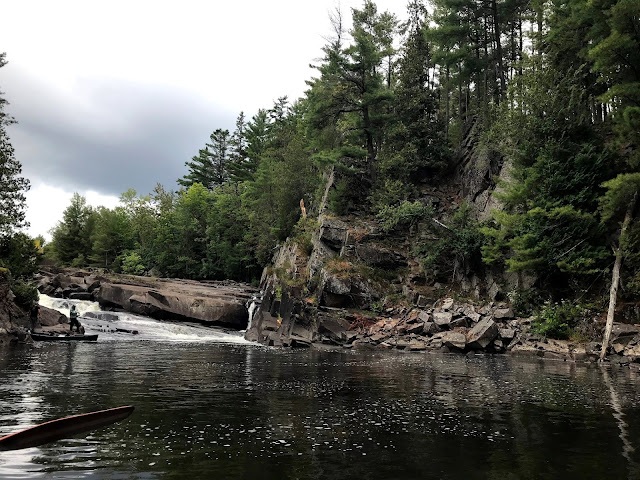 The view of the river from different angles, The Talon Chutes waterfall, and all the things we learned about natural and cultural history, geology, biodiversity of the Mattawa River during this guided tour in the canoe and at the hike was superb. Our knowledgable guides, Mathieu and Connor made this tour exciting. 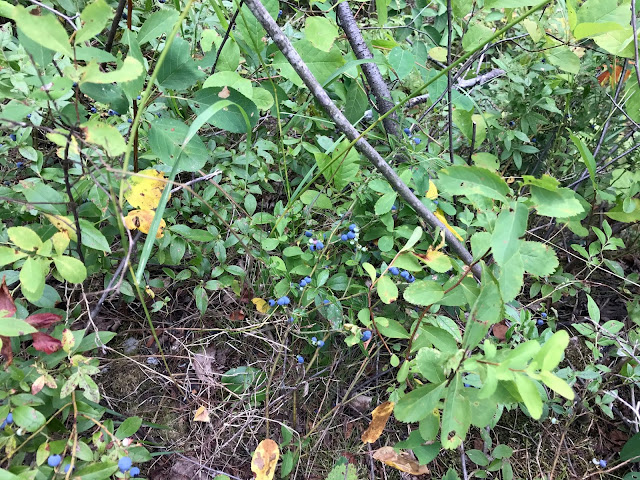 Wild blueberries that we enjoyed. 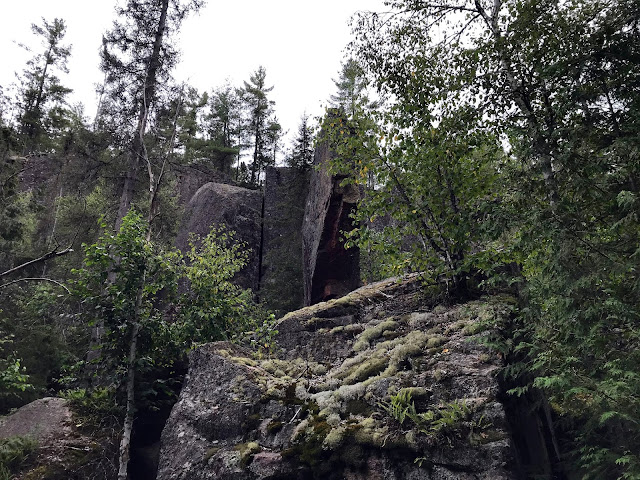 Geological wonders such as the symmetrical lines in nature. 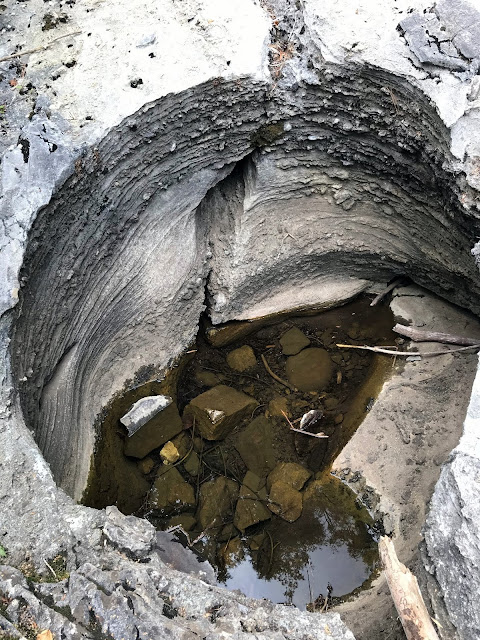 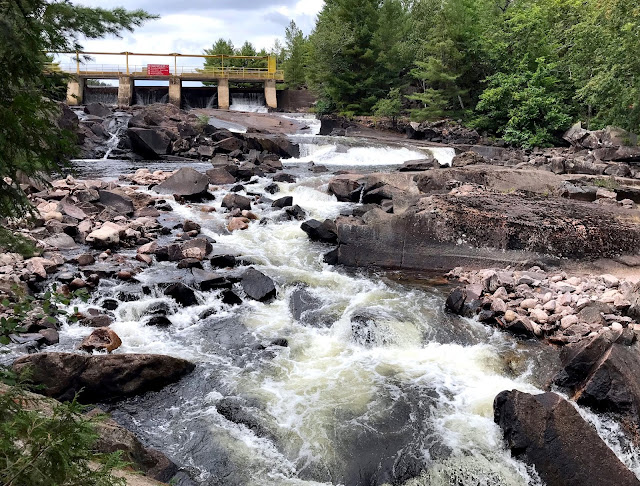 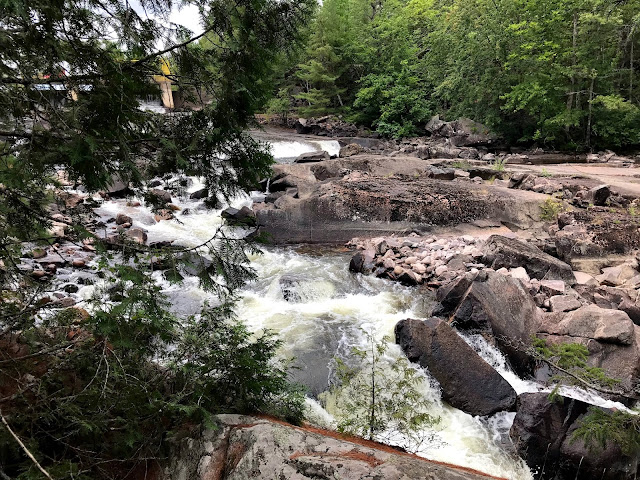 It was fun experiencing how life would have been for a Voyageur. Although, we learned that a voyageur's life wasn't about singing, drinking, and paddling for fun, rather it was hard as they only earned a modest wage working for Montreal based traders, and many ended their careers disabled because of hard labour and injuries. In 1760 there was a charitable fun established in Montreal for the "relief of disabled and decayed voyageurs". 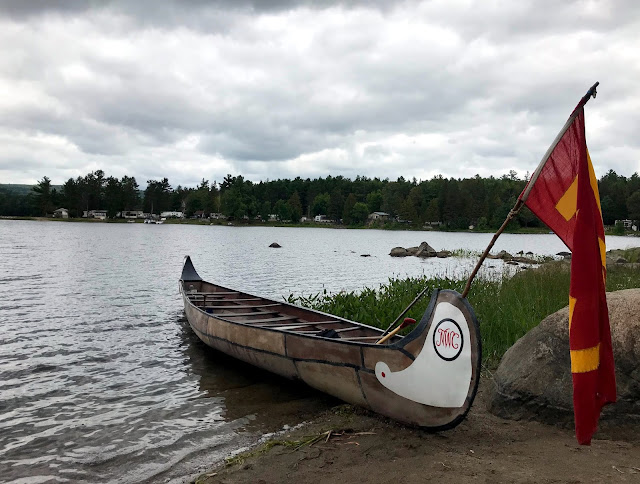 The fur trade on Mattawa river flourished until early 1820s because of the labour of thousands of French Canadians and Aboriginal voyageurs. In the 1850s there were logging camps set up along the river, and in 1885 the Canadian Pacific Railway line ran along the south side of the Mattawa Valley.

Each year, we enjoy visiting different Ontario Parks to learn about the history of our nation and stories about different people and significant places. Every park is different and unique, with lots to explore!

All rights reserved on photographs and written content Createwithmom © 2010 - 2019. Please Ask First Please note that all opinions and thoughts expressed are my own.