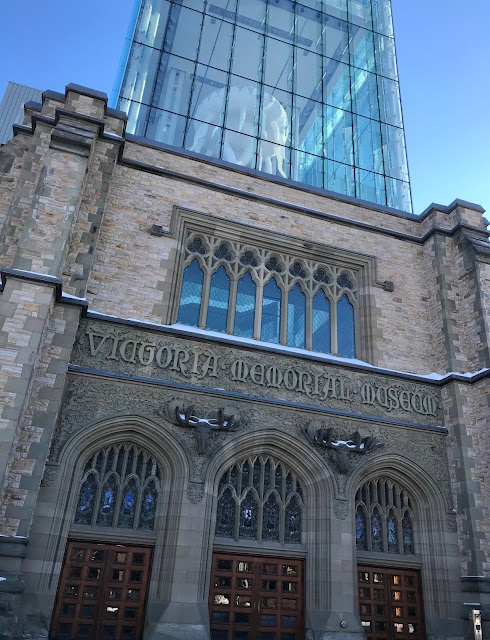 Canadian Museum of Nature in Ottawa designed by chief architect David Ewart in 1912 was influenced by the Beaux Arts style. His design was inspired by features found in castles during the Romanesque and medieval styles of Europe, and has Tudor and Gothic features. This museum brings natural history to life through interactive displays, impressive artifacts, and live species. There is a lot to see and do at this museum, it is a place that will be enjoyed by every age group.

The architecture is surely something to admire while at this museum. The interior detailing, stonework, the mosaic floor, the stained glass work, and the layout is beautiful. During our visit we learned about the Ottawa region and how it affects the design of the building. For example, this part of Ottawa is in an earthquake zone so the designers reinforced the architecture with metal work. We also got to know that the heavy sandstone building was built on clay, so the stone tower sank into the ground in 1915 and the upper tower at the entrance had to be removed. 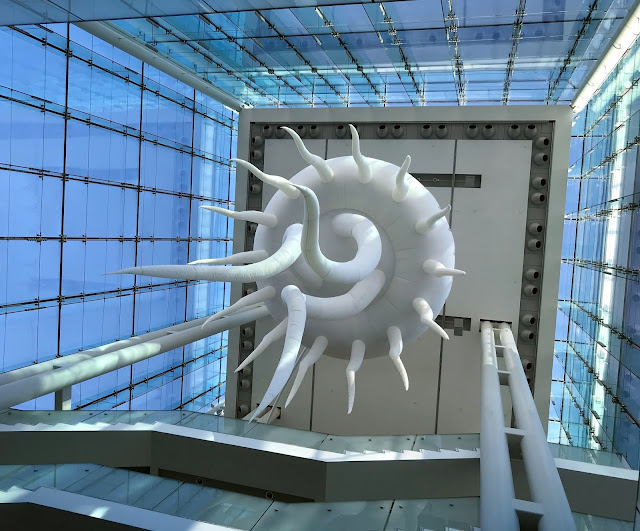 In 2010, Queens' Lantern, a beautiful architecturally designed set of stairs from David Ewart's original design has been placed. We can see the special exhibition, La Méduse, hanging over the Nature Nocturne dance floor as we walk up these stairs. It is an inflated creature modelled after a jellyfish species named Pelagia noctiluca, which glows in the dark. It was interesting to learn that this museum served as Canada's House of Commons and Senate following the great fire that destroyed the Centre Block of the Parliament in 1916. 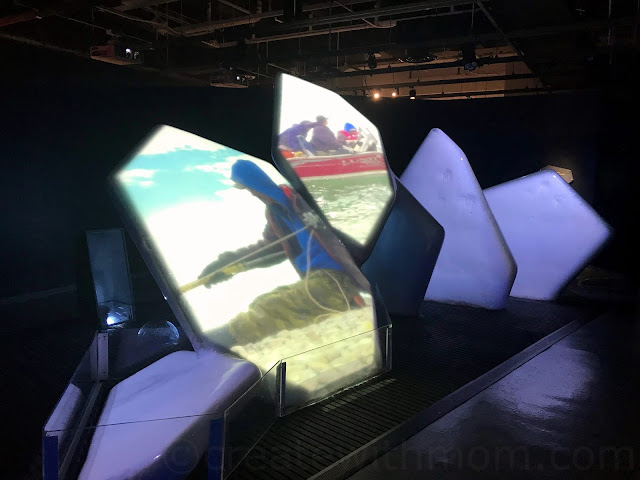 We started to explore the museum from top down starting at the the fourth floor, the Canada Goose Arctic Gallery. We learned a lot of information about the Arctic and discovered how unique this region is. The above picture Beyond Ice, is a multimedia installation with real ice produced by the museum with the National Film Board of Canada. 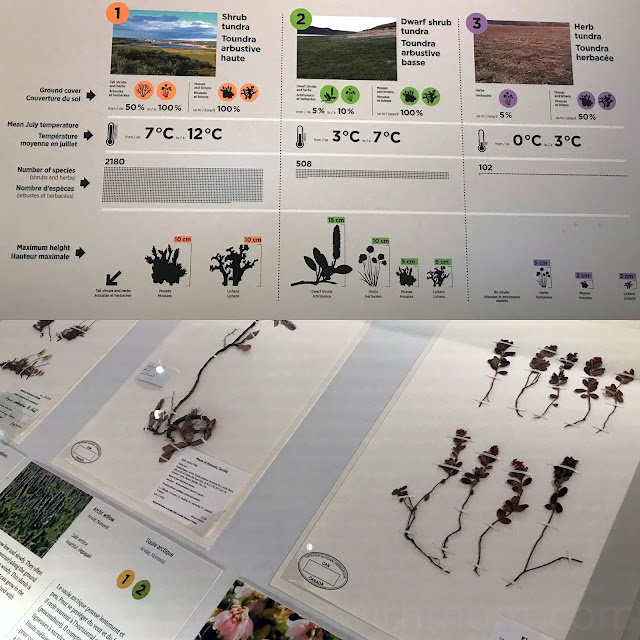 Look closer at these pictures to see how small the plants are in the Arctic. Although, the temperatures are extremely cold there are insects and arachnids to pollinate plants and recycle nutrients. These insects are an important food source for other animals. 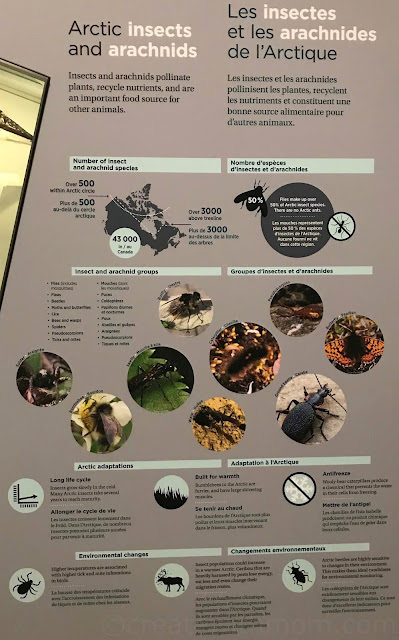 As we have all heard, human activities are accelerating Earth's climate cycle and changing our environments rapidly. Environments such as in the Arctic are planet's most delicately balanced regions. For example, a small temperature change at the freezing point has a drastic effect. 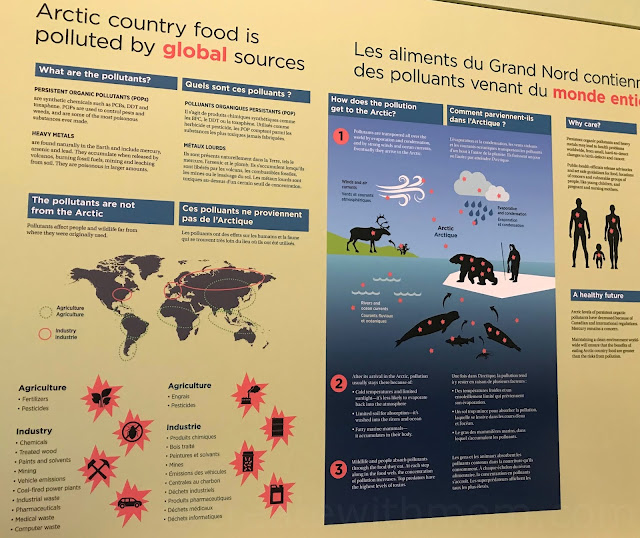 In the last 70 years, the Arctic's temperature has increased dramatically causing concern. The displays at the museum has lots of information we think everyone should become aware of, so we can all reduce our carbon footprints. 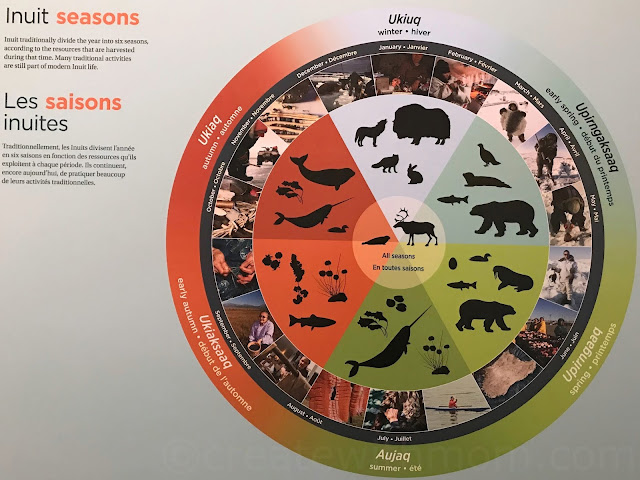 It was interesting to learn that Inuit people have six seasons that aligned with the resources they harvested and their traditional activities. 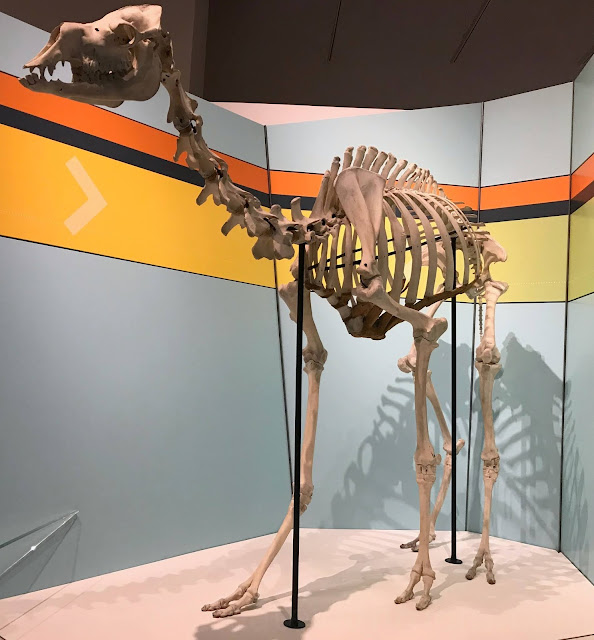 We learned that once there were High Arctic camels, since fossil bone fragments from 3.5 million years were collected on Ellesmere Island, Nunavut. These camels are 30% bigger compared to modern day camels. 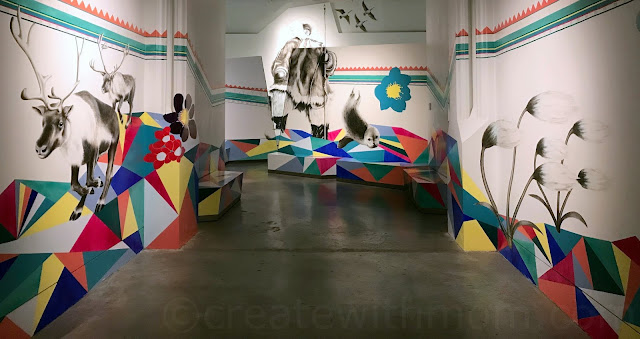 We also spent time exploring the special exhibition, "Our Ways or Ilurqusivut" by Nancy Saunders. This installation from 2017 is an anamorphosis, an optical illusion that appears as a cohesive work of art when seen from a particular perspective, but becomes fragmented when seen from different viewpoints. This device of anamorphosis shows that multiple perspectives are needed to fully understand the Arctic. This art work combines aspects of traditional and modern Inuit life which includes animals, hunting, icebergs, Arctic flowers, and parka trim or tattoo designs. The Inuinnauyugut display is an area dedicated to all Inuinnait, so we can learn about the culture.

Since the Arctic circle is divided among eight countries Norway, Sweden, Finland, Russia, the United States (Alaska), Canada (Yukon, Northwest Territories and Nunavut), Denmark (Greenland), and Iceland it is important the countries work together to protect it. 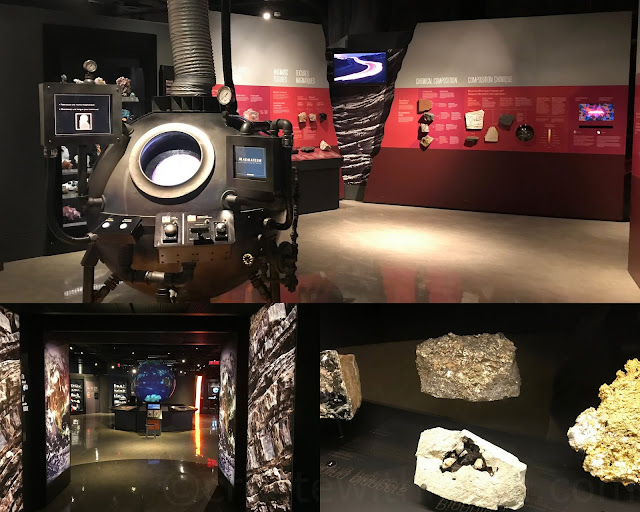 On the third floor there are three galleries, the Earth Gallery, Bird Gallery, and Nature Live. There is a collection of minerals and rocks, lots of information and interactive displays teaching about our planet, as well as a limestone cave similar to a real one we explored during our visit to Bonnechere Caves. Canadians use over 20,000 kg of minerals extracted from the Earth. We use it when we drive our cars, for our homes, in our technology, as well as to grow, prepare, and eat our food. Minerals play a critical role in our economy as Canada is a leader in mining, producing and exporting minerals, metals, and mineral-based products. 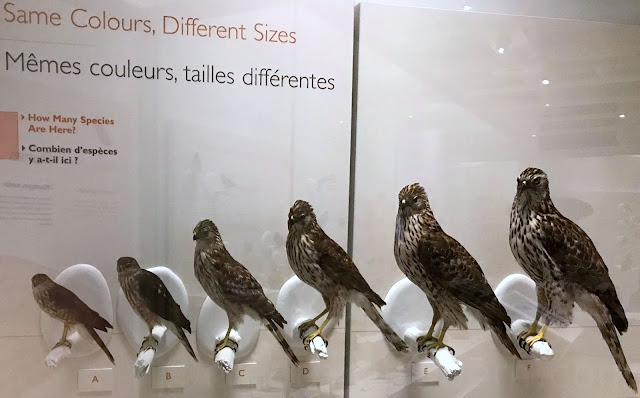 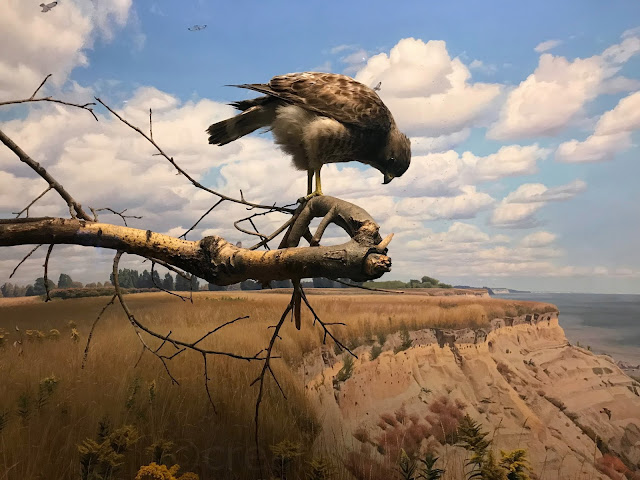 These birds of prey can live in the same environment. The different sizes ease competition for food because the animals they hunt are in proportion to their size. At the Nature Live we saw creepy collections of live insects such as cockroaches and beetles. 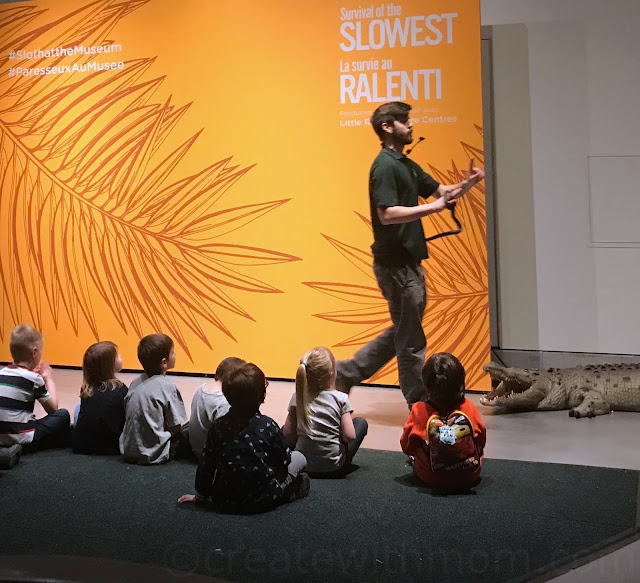 Currently at the museum, they have the Survival of the Slowest exhibit. We enjoyed the live animal demonstration and learned about chameleon, bats, rattlesnakes, hedgehogs, turtles, and a sloth. This exhibition is produced by Little Ray's Nature Centres, which is the largest exotic animal rescue organization in Canada that inspires people to reflect on our connections with other animals and the importance of conservation. This exhibition highlights survival strategies of different species and shows how living a slow life means eating less, saving energy, and hiding more easily. 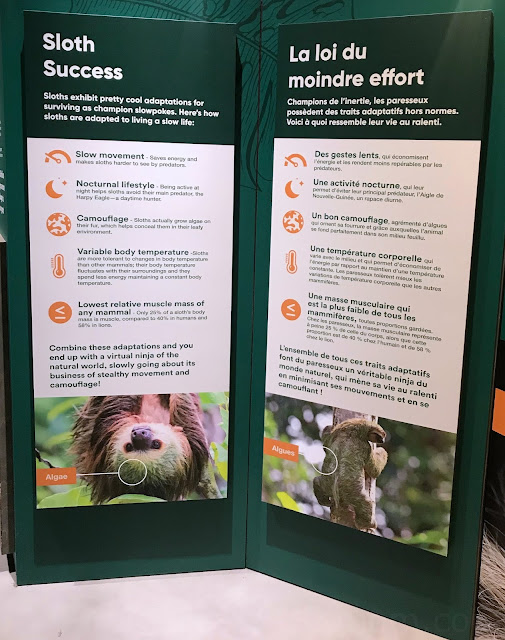 During our visit the Water Gallery was closed, however from the outside we saw the 19 metre blue whale skeleton. We enjoyed learning about iconic Canadian mammals at the Mammal Gallery. 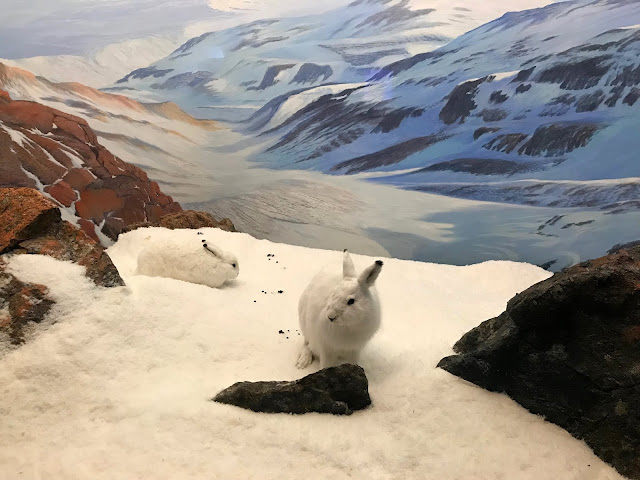 We like how the life-size diorama paintings by Canadian wildlife artist, Clarence Tillenius showcases the habitat of the mammals and gives us a better perspective. 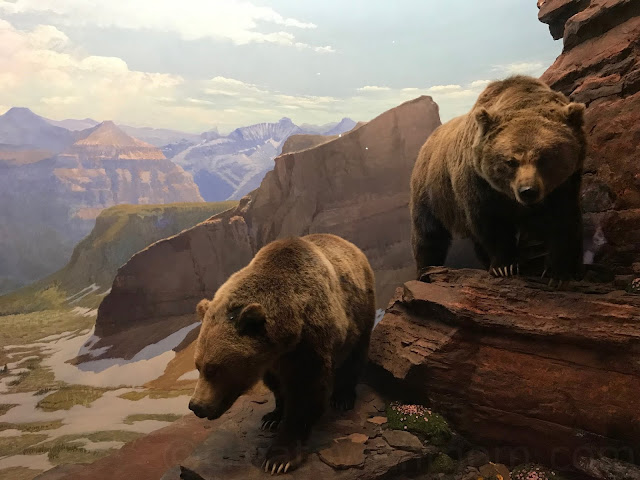 The Richardson's ground squirrel uses its burrow to hide from aerial hunters such as Swainson's Hawk and to escape the hot prairie sun in places like Shilo, Manitoba. 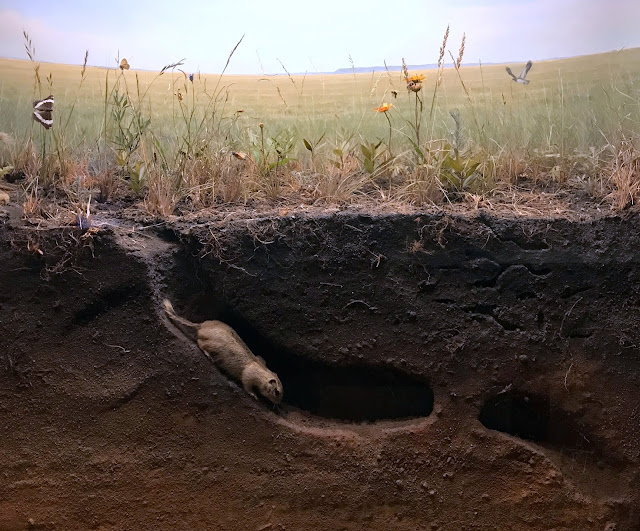 In the first floor at the Fossil Gallery we saw fossil skeletons and as-in-real-life dinosaurs. 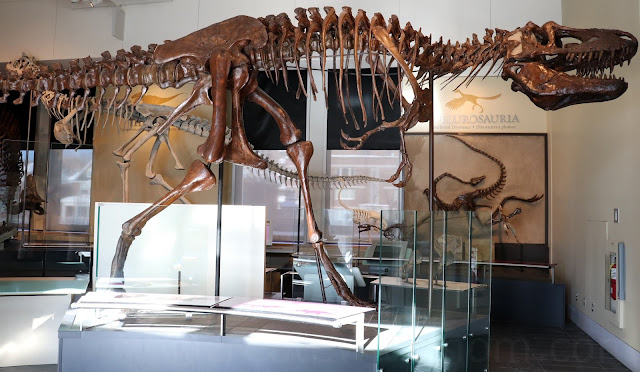 The downstairs of the museum at the Solarium, we got to enjoy the serene feeling of butterflies fluttering around us. 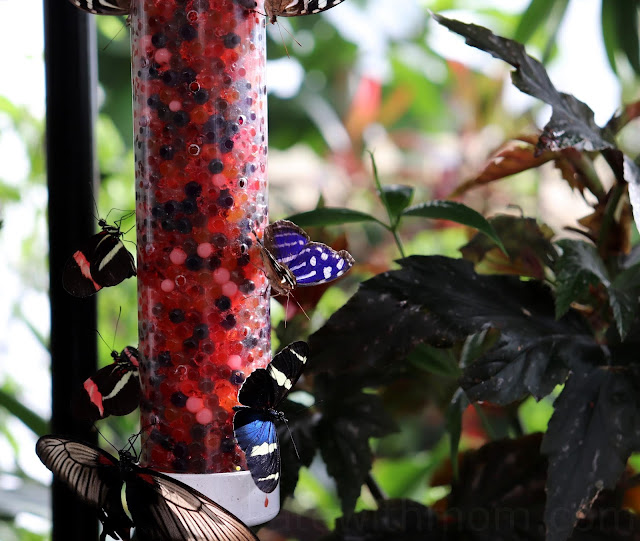 It was nice to soak in the sun and remind ourselves of tropical environments, as the space is filled with flowering plants, water feature, and different species of butterflies. 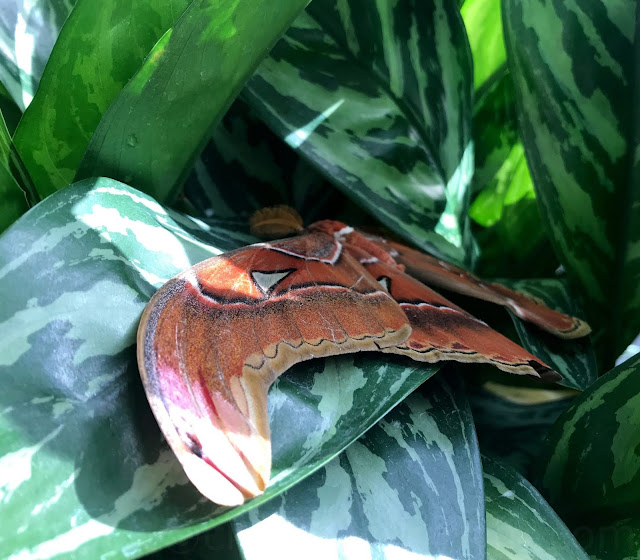 They have a few moths in this space for us to learn the similarity and difference between these insects. We like seeing the original stone wall of the museum as we walked to the Solarium. 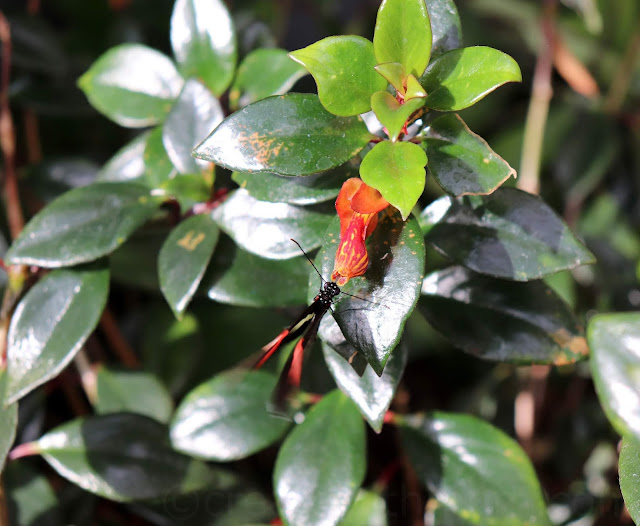 It is convenient that the museum has a space to hang our jackets for free, which allows everyone to relax and spend time leisurely exploring the museum. They also have a cafe and a gift shop. There is on-site paid parking. 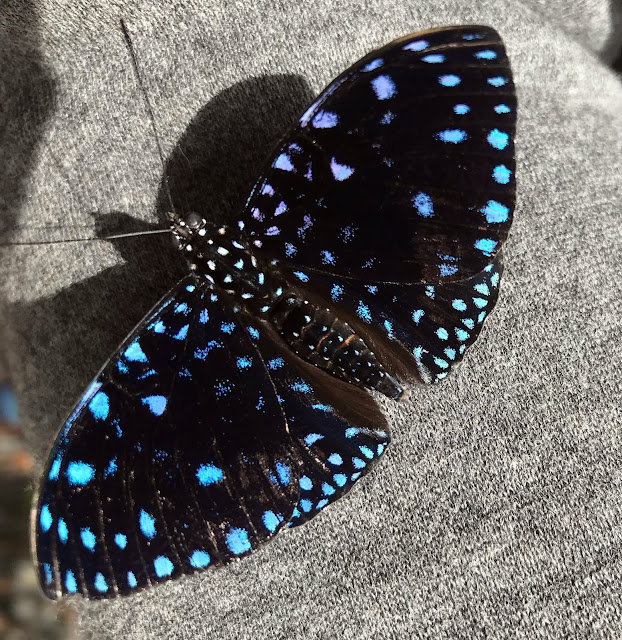 Currently, Amazon Adventures is playing on 3D movies at this museum. We totally recommend it, as it teaches about animal mimicry and natural selection. 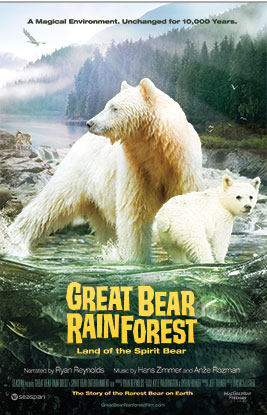 We were delighted after seeing the different galleries at the Canadian Museum of Nature we got an opportunity to watch the Great Bear Rainforest IMAX movie at the Ontario Science Centre. This IMAX movie focuses on Canada's Great Bear Rainforest located in the rugged Pacific coast in British Columbia. The IMAX movie celebrates the co-existence between humans, land animals, and sea creatures.

It is wonderful to see how First Nations communities have been and are trying to preserve the rainforest by teaching younger generations. They are collaborating with rainforest advocates and scientists to ensure the continued health and survival of this fragile ecosystem. The crew has spent three years filming the remote reaches of the rainforest, which was wonderful to watch. It would have been more educational if the story narrated more about the wildlife that was found in this rainforest especially the Spirit Bear. The movie will open on February 15th.

Disclosure: We were invited to experience the Great Bear Rainforest IMAX movie at OSC. All rights reserved on photographs and written content Createwithmom © 2010 - 2019. Please Ask First