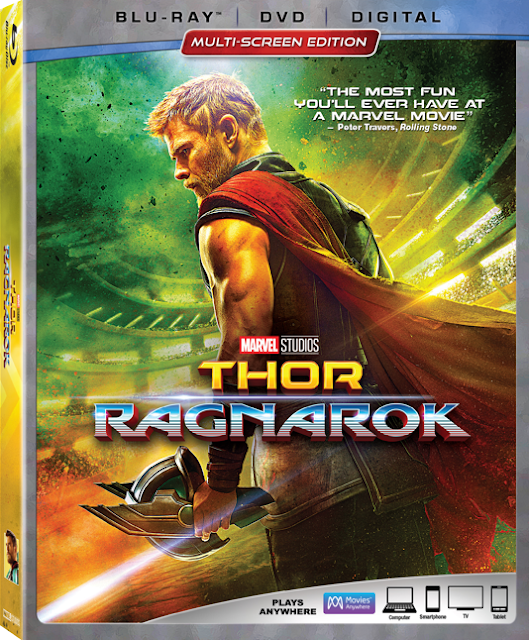 We enjoyed watching Marvel Studios' "Thor: Ragnarok," a colourful cosmic adventure with thunderous action and lightning-fast wit. The adventure, loaded with action, humour, drama and spectacle is available digitally in HD and 4K Ultra HD™, and Movies Anywhere, on February 20 and on 4K Ultra HD™, Blu-ray™, DVD and On-Demand on March 6.


In this movie, Thor is imprisoned on the other side of the universe without his mighty hammer and finds himself in a race against time to get back to Asgard to stop Ragnarok - the destruction of his home world and the end of Asgardian civilization - at the hands of an all-powerful new threat, the ruthless Hela. He must survive a deadly gladiatorial contest that pits him against his former ally and fellow Avenger, the Incredible Hulk and grapple with his silver-tongued adopted brother Loki, the fierce warrior Valkyrie, and the eccentric Grandmaster.

Director Taika shares Australia/New Zealand influences and fun facts from the movie.
1. The horns on Surtur's helmet were crafted out of an ancient Australian boomerang that the crew received as a gift while filming in Australia.
2. The Grandmaster's henchwoman, Topaz, is played by Rachel House. She has starred in many of Taika Waititi's projects, including Eagle vs. Shark, Boy, and Hunt for the Wilderpeople.
3. Taika Waititi is a big fan of sketch comedy actor Steven Oliver from Australia's "Black Comedy" television series and contacted him to be "Cousin Carlo" in a scene with Jeff Goldblum.
4. The scene where Valkyrie opens a bottle with her blade is an homage to the Beth Heke character in Once Were Warriors.
5. Chris Hemsworth loved Taika Waititi so much he shaved an "N" and a "Z" in the sides of his head for "New Zealand." (according to Taika, at least)
6. Interns from a local Aboriginal community created much of the Hulk parade masks and banner props on Sakaar. Several of the interns ended up getting jobs with the art department.
7. During Hela's fight sequence against the army of Asgard, she is doubled by the famous New Zealand stuntwoman, Zoe Bell.
8. The colours for The Grandmaster's ship, The Commodore, were inspired by the Aboriginal flag, while Valkyrie's ship colours were modelled on the Maori flag. Many of the space ships in the film were also named after cars from the Australia/New Zealand car company, Holden such as Statesman, Commodore, Escort, Kingswood, Torana, etc.

All rights reserved on photographs and written content Createwithmom © 2010 - 2018. Please Ask First Disclosure: Please note that all opinions and thoughts expressed are my own. For reviews and/or sponsored posts on this site I may have received special perks as part of my affiliation.

Email ThisBlogThis!Share to TwitterShare to FacebookShare to Pinterest
Labels: movie