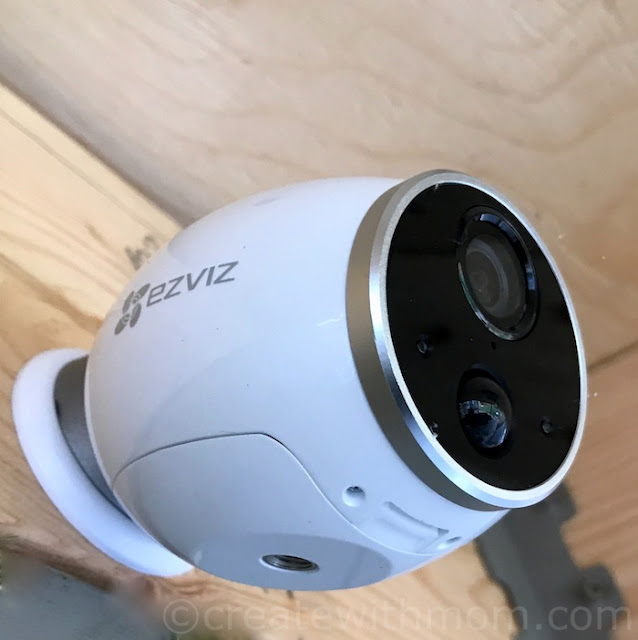 It is surprising how far technology has evolved, making it easy for us to keep an eye in our home and surroundings from far away through crystal clear quality video. As we travelled many places this summer, we are glad we installed a couple of security cameras from EZVIZ. 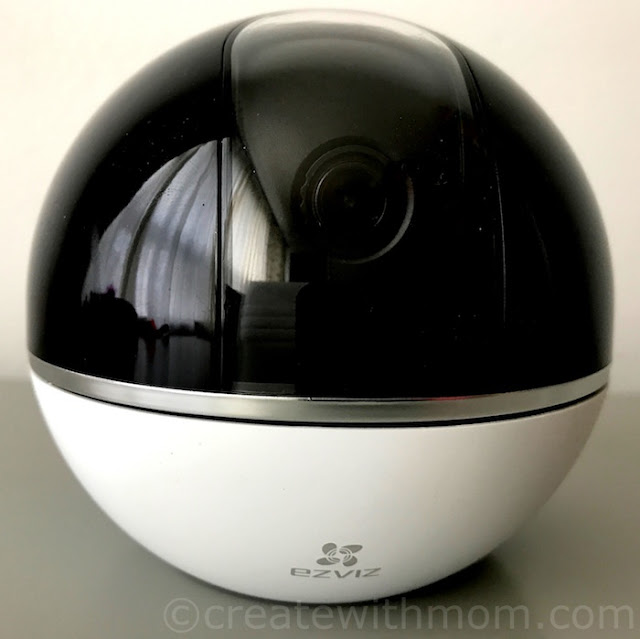 The EZVIZ Mini 360 Plus is an indoor camera that captures video in full HD. It is built with great features mostly found in high end security cameras.

The EZVIZ Mini 360 comes with the camera base, mounting options including a drill template and screws, the power cable and brick, and the quick start guide. This dome shaped security camera has its lens enclosed in glass. It stores recordings in a MicroSD card and is Wi-Fi and Ethernet ready. EZVIZ also provides a paid Cloud play service to save videos in the cloud. Initial Setup is very straight forward. For setup, plug in the camera to power on and open the EZVIZ app which works for both iOS and Android. After registering an account through the app we scan a QR code located on the bottom of the device. Once the app recognizes the camera it is good to go. 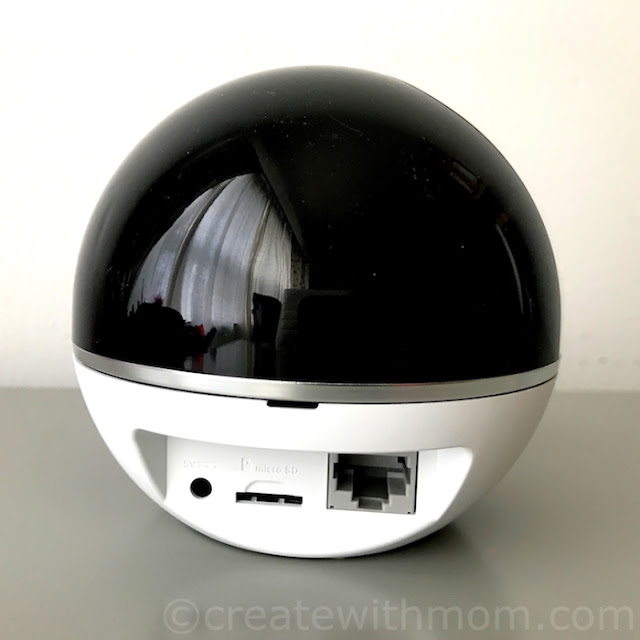 The camera does not record 360 video at once, but it can pan 360 degrees. It also has an option to take a 360 panorama shot of the room. We are impressed with the quality of the HD video, as all the details look sharp and clear.

The EZVIZ app enables us to catch the action live from anywhere. There was no noticeable lag when viewing live video, but it always takes a few seconds for the video to load initially. The Mini 360 Plus captures excellent video and snapshots when it is dark, as it has night vision with a range of 33 feet. The night vision provides clear and blur free output.

The Mini 360 Plus provides an auto tracking feature which provided decent tracking when we tested it. If you make quick movements back and forth, the camera gets a little confused and starts tracking only when the person slows down. For regular movements the camera provided accurate tracking. The tracking feature can be turned off if needed. In addition to video, the Mini 360 Plus has Two-Way Talk as well. This works like an intercom, and you can communicate from the app to anyone near the camera at home. The audio quality was decent and both parties were able to hear each other without repetition.

We really like the features packed into the EZVIZ Mini 360 Plus. Since the camera is controlled solely with the app, it would be nice to see what others features will be added in the future. For instance, we would like to have the option to set presets so that the camera saves a particular angle and can return back to that preset when requested. It would also be useful to get email notification with a preview of the image of the alert. 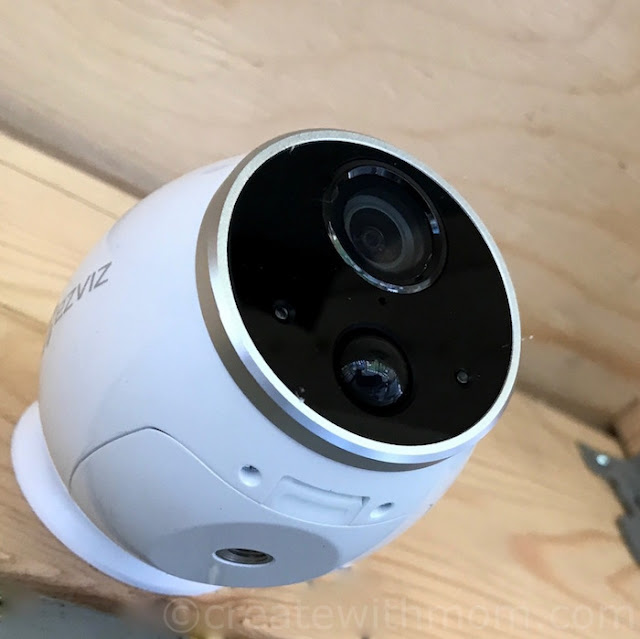 The EZVIZ Mini Trooper is one of the most stylish, versatile security camera we have used. It is a battery powered HD security camera. Although, only two CR123A batteries are required for operation, four batteries are included for a maximum battery life up to 9 months under certain conditions. The EZVIZ Mini Trooper is shaped like an egg and it has the camera lens, microphone, and a light sensor built in. The MicroSD Card slot and external antennas are found in the base station where all the magic happens.

The setup, customization, video recordings all take place in the base station. One base station can sync unto 6 Mini Trooper cameras. The base station has Wi-Fi Antennas, and a MicroSD slot to store videos. It also has a sync button and a reset button. Given that it connects directly to an outlet, we found it a bit bulky and the two plastic antennas expand outward resembling a bee. If anything knocks the base station it does tend to fall of easily. We had a couple of instances when the camera was not working only to find that the base station had been knocked down unintentionally. 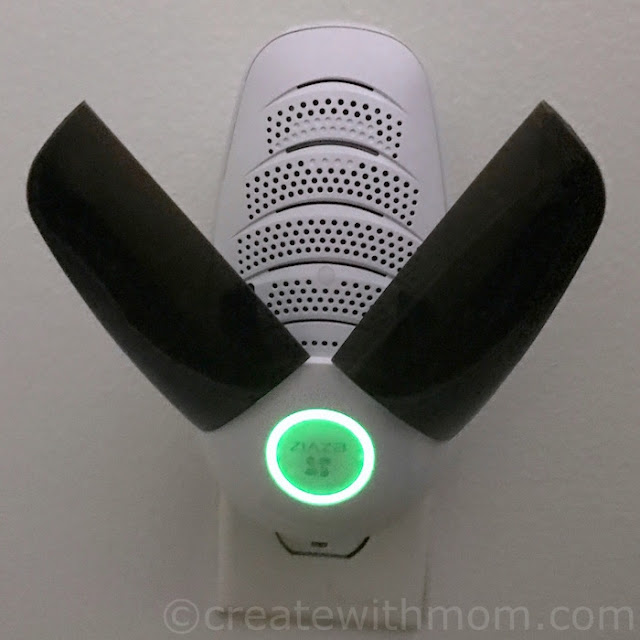 Unlike the EZVIZ Mini 360 Plus, setup was not straight forward for the Mini Trooper. Since we opted to connect the base station using Wi-Fi, there were a few extra steps and some hiccups along the way. Using Wi-Fi setup, the phone showed two EZVIZ networks (2.4Ghz and 5Ghz) and it finally connected to the 2.4Ghz network. After the app prompted for a firmware upgrade it did not complete until we moved the base station very close to our router. Once, the firmware upgraded successfully we didn't have any issues.

The EZVIZ Mini Trooper has the best quality video we have seen in any security camera so far. Although it is only 720p, it shows all the colours and individual detail without any lag. It has a good microphone that picks up even the slightest noise making us feel like we are actually there. Recording and Live video is seen using the EZVIZ app. We like that EZVIZ cameras use the same app and all cameras can be configured and controlled in one convenient place.

The Mini Trooper has a clever mounting option. It comes with a powerful magnetic mount. You have to screw in the mount and then the camera can be attached to the magnet and moved around for accurate placement. The Mini Trooper can also be attached and reattached anytime. Since the mount is magnetic and placed manually it cannot pan and tilt on its own like the Mini 360 Plus. This was not a problem for us because the Mini Trooper has a wide angle vision so that everything is seen at once. We hope EZVIZ can somehow integrate Video Masking into the app so that we can choose which zones in the view to block motion detection, so that it does not create unnecessary alerts. The EZVIZ Mini Trooper really lives up to its name. It handles live view and motion detection with ease and it will be fun to add more Mini Troopers to the base station for complete security.

All EZVIZ security cameras are smart home integrated using IFTTT and the possibilities of creating different applets are endless. EZVIZ cameras can be purchased online at www.bestbuy.ca and in stores soon.

All rights reserved on photographs and written content Createwithmom © 2010 - 2017. Please Ask First Disclosure: For reviews and/or sponsored posts on this site I may have received special perks as part of my affiliation. Please note that all opinions and thoughts expressed are my own.