Summer holidays are around the corner, which means with the longer days and later bedtimes there is more time for outdoor activities and time to take breaks with Netflix. The third season of All Hail King Julien has arrived on Netflix, which is one of our favourite shows to watch as a family. 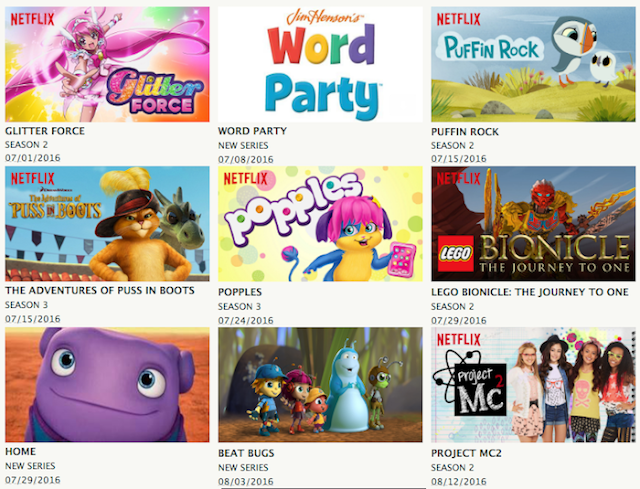 My children watch a few shows that are on Netflix such as the following.

Mia and Me
It is about... Mia, a 12 year old girl who just entered boarding school. She received a book and a bracelet from her father that died long ago; this present was supposed to be for her birthday, but she received it earlier. The book may look like other normal books, but when Mia discovers that it can transport her to another world, the book becomes the most important thing she has. Mia, Yuko, and Mo in Centopia always go on adventures such as stopping Panthea the evil witch who wants unicorn horns to keep her from getting old, or Rixel who always tries to target Onchoa the special unicorn with wings and a golden horn. This human-elf adventure is an exciting show.

Legends of Korra
Korra is the avatar and she needs training from Master Tenzin. When Master Tenzin comes to the South Pole (Southern water tribe) and says he cannot train the avatar. Korra follows Tenzin all the way to Republic city where Tenzin lives. With some negotiations Master Tenzin decides to train Korra in the Air Temple island in Republic city. Tenzin teaches Korra how to master the element of air. Once Korra mastered the element of air she never went back home, Republic city needed her as she was the avatar. Korra and her friends, Mako, Bolin, and Asami fight enemies like Amon, Kuvira, Unalaq, Vaatu, and Zaheer. Korra learns other types of bending like metal bending and energy bending. Energy bending is the ability to bend another person's life or spirits, Korra used this to return Lin Beifong's earth bending.

Young Justice, Lego Ninjago, and Lego Bionicles are other shows they watch on Netflix.