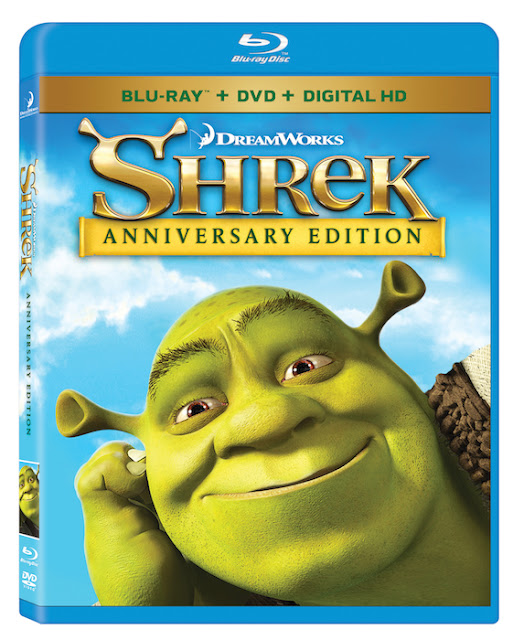 I can't believe it has been 15 years since we met Shrek! We can now revisit the swamp and all the classic fairy tale characters on Shrek's 15th Anniversary Edition, which is now available on Digital HD, and will become available on Blu-ray and DVD June 7th. The endearing ogre sparked a motion picture phenomenon and captured the world's imagination with the Greatest Fairy Tale Never Told.

Relive every moment of Shrek's daring quest to rescue feisty Princess Fiona, with the help of his lovable loudmouthed Donkey, and win back the deed to his beloved swamp from scheming Lord Farquaad.

In Shrek 2 with the help of his faithful steed Donkey, Shrek takes on a potion-brewing Fairy Godmother, the pompous Prince Charming, and the famed ogre-killer, Puss In Boots, a ferocious feline foe who's really just a cat at heart. When his frog-in-law suddenly croaks in Shrek The Third, Shrek embarks on another whirlwind adventure with Donkey and Puss In Boots to find the rightful heir to the throne. Shrek longs for the days when he was a "real ogre" in Shrek Forever After. Shrek signs a deal with Rumpelstiltskin to get his roar back, but turns his world upside down in the process.

Giveaway:
If you are in Canada or USA you can win a Blu-ray copy of Shrek 15th Anniversary Edition by entering the giveaway through the rafflecopter below before June 25th. Please leave comments and follow my social media networks to be eligible to win.

Update: The winner is Wayne

a Rafflecopter giveaway
All rights reserved on photographs and written content Createwithmom © 2010 - 2016. Please Ask First Disclosure: For reviews/ sponsored posts I may have received special perks as part of my affiliation, all opinions and thoughts expressed our my own